With seven American Superbike Championship wins to his credit, Mat Mladin is regarded as one of the best riders the Australian championship has ever produced. Winner of the 1992 title as a rookie before going on to contest a whirlwind season in 500GP for Cagiva, Mladin eventually found a home in the US, where he would establish a lucrative career between 1996 through 2009 when he retired with the number one plate. These days, Mladin can be found in the Australian Superbike Championship (ASBK) paddock, where he has taken on the role as team owner of Suzuki-equipped rookie Supersport class standout Max Croker, plus just recently he was inducted into the Australian Motor Sport Hall of Fame. CycleOnline.com.au spoke to Mladin about his achievements in this latest Industry Insight interview.

This year sees you enter the land of team ownership in the Australian Supersport Championship with Max Croker on the Suzuki GSX-R600. How have you been enjoying it?

It’s been a real pleasure and delight to work with Max. It’s something I’ve been thinking about doing for the last couple of years, you know, getting my toe back in there and getting out there and having a bit of fun. I’ve been outside of the racing industry now since I retired nearly nine years [ago] now. I needed to get myself back to the track, put my brain back to work and to give myself some fun in something I really enjoy. As I’ve said all year, I’m really lucky to have come across Max and the Crocker’s – it’s been a real joy working with them and trying to help out.

How hands on are you with both the team and also Max’s development as a rider?

Obviously I speak to Max about my experiences as a racer – things that did work for and things that didn’t work for me on many levels. Not that there are any shortcuts in racing, but I’m trying to stop him from possibly making the mistakes that I made coming through, whether that be training, preparation or whatever it may be – there are certain things we now know that don’t work, whatever it might be – it’s been good to work with Max hands on there. Scott Croker, Max’s dad, he still builds bikes at home, and Jamie Stauffer, he’s about to do an engine for us – so our engines have pretty much been not far from stock up and until now – next week we’ll have a nice engine done for the number one bike. Scott still does the work on the bikes and takes care of those things, and you know, we share responsibilities in a lot of areas. It’s been good to get out there, help and pass on some of my experience – obviously I was in the game for a long time, so there’s a bit of knowledge stored away.

Do you have any plans for the team in the longer-term or are you just taking it year-by-year?

We’ll take it year-by-year – we’ll see where we go this year and see what happens at the end of the year. I don’t want to look too far forward, it will take the fun out of it. 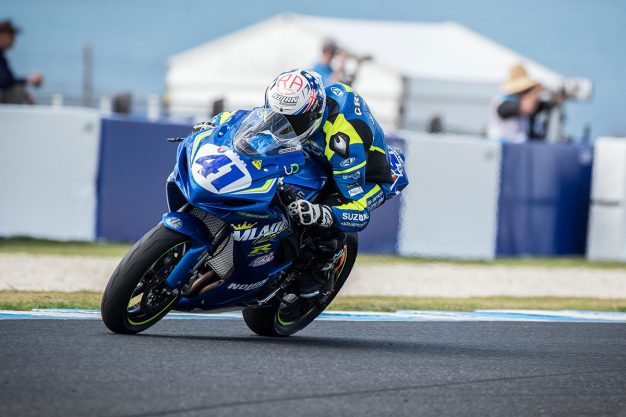 We’ve seen you around the ASBK paddock for a number of years now, mostly as an observer. What are your thoughts on the series as it stands at the moment?

It’s definitely come a long way, I think I stuck my head in maybe three year ago for the first time, and it’s certainly come a long way since then. I think motorcycling Australia has a good team of people looking after things at the top there – I think the sport in general – even though there’s not a lot of money or funding in Australia at the moment from the manufacturers – I think the sport is in good hands. I think we’ll see some more growth in the future, hopefully the sales of motorcycles pick up and we’ll see a bit more funding come back into racing.

And just recently, your achievements were recognised with an induction into the Australian Motor Sport Hall of Fame. That’s a pretty special acknowledgement, around nine years after your retirement.

It was a good night, there’s certainly something there when you look back at your career and see what you’ve done. I obviously won a few championships and races, both in Australia and in America, and on the dirt and on the road. It was nice to be selected by the hall of fame committee, and the people that are in there – obviously one of them, Peter Doyle, is a really close friend – and the other people from CAMS are from outside of the motorcycle industry. It was nice to be acknowledged for my achievements.

Just to cap this off, if you had to name one moment, what highlight would stand out in your career as a racer?

I would have to say the most enjoyable year of racing that I would’ve had would be the 1991 250cc production championship – the inaugural championship where I was racing all the boys – the same lads I was racing against in the dirt – it was just good racing where we were all 18 years old – there was no care in the world at that time or pressures. We just turned up to the race track, flogged the bike and went as hard as we could – there was no pleasing sponsors, none of us worried about pleasing our parents [laughs] – we were really free. That year really stands out for me, and from that year on, in 1992, I got my Australian superbike ride and started getting paid to ride motorcycles – there’s an element there that certainly takes away that care-free attitude and you have to start thinking about winning championships, and start thinking about other people who are attached to that championship – your crew and your mechanics. Then you have to start thinking about brands and marketing them properly – not saying the wrong things – that certainly takes away from the care-free attitude that we had in 1991. As far as a moment, I couldn’t say, but as far as a racing year goes, ’91 I look back on with the most fond memories.