Post-race updates from round three of the 2018 Yamaha Motor Finance Australian Superbike Championship (ASBK) presented by Motul Pirelli direct from The Bend Motorsport Park in South Australia on race-day Sunday. 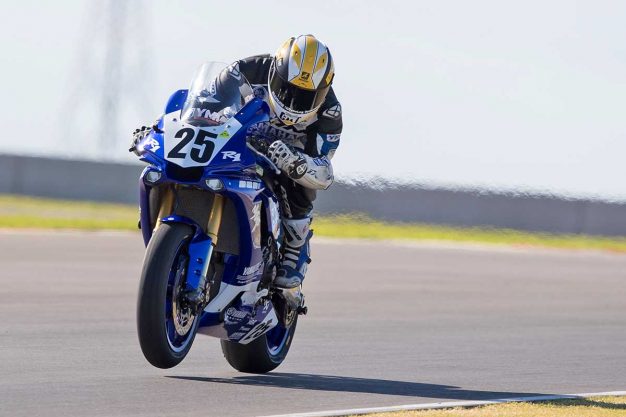 Kawasaki Supersport race two:
It was once again the Yamaha Racing Team YZF-R6 of Cru Halliday who controlled race two of the Kawasaki Supersport class, making his way to the front ahead of Tom Toparis (Cube Racing Kawasaki) by the conclusion of lap three and he stretched away an advantage from there. With a quickest lap and new record of 1m56.776s, Halliday eventually topped Toparis by 4.671s, as Mladin Racing’s Max Croker returned to the podium in third. Fourth was a strong finish for local John Hunt (Suzuki), who led in the early stages, holding Zac Johnson (Yamaha) at bay for position. Next came BCperformance Junior Team’s Giuseppe Scarcella (Kawasaki), with Ty Lynch (Yamaha), Rhys Belling (Yamaha), Dallas Skeer (Suzuki) and Thomas Bryden (Yamaha) the top 10.

YMI Superbike race two:
Penrite Honda Racing’s Troy Herfoss managed to turn the tables on yesterday’s winner Wayne Maxwell (Yamaha Racing Team) in race two on Sunday morning, making his way into the lead up the inside at turn 13 on lap seven and going on to win by just 0.220s with the race’s fastest lap of 1m52.939s. In a reverse of fortunes it was a gritty Bryan Staring (Kawasaki BCperformance) who stormed to second after also making his way by Maxwell in the later stages, the podium eventually finishing in that order. Both Allerton and Falzon passed Troy Bayliss (DesmoSport Ducati) on the final lap, demoting him to P6, followed by Alex Phillis (Phillis Racing Suzuki), Jamie Stauffer (Craig McMartin Racing Ducati), Arthur Sissis (SA Demolition Suzuki) and Mitch Rees (Honda). Disaster struck Team Suzuki Ecstar’s Josh Waters, who was second across the line on lap one, only to be forced out with an apparent mechanical fault in the early sector of lap two.

Kawasaki Supersport race three:
Race three of the Kawasaki Supersport saw Halliday clinch a clean-sweep for the round, working his way through the field from third at the end of lap one and comfortably winning by 3.306s from early front-runner Toparis, who this time out came under added pressure from an impressive ride by Johnson. He was in turn followed directly over the line by Croker, as Scarcella rose to claim a top five finish in race three. Claiming sixth to conclude the round was Hunt, edging Damon Rees (Honda), Lynch and Luke Mitchell (Yamaha) – all crossing the line in formation. Skeer rounded out the top 10. As a result, Halliday won the round from a consistent Toparis and leading rookie Croker, while in the standings it’s now Halliday in control, 12 points up on former leader Toparis and New Zealander Rees.

YMI Superbike race three:
It was a case of being in the right position at the right time for 2016 champion Herfoss in race two, leading when it ultimately counted as a red flag came out as a result of Bayliss – who led the opening laps – crashing out of fourth position at turn 10 on lap seven. The race was declared and results were decided on those as riders crossed the line on lap six, with Herfoss the victor by 0.174s ahead of home favourite Falzon, who put on an inspired charge to P2, and Maxwell. It was another frantic fight at the front of the pack, however there’s little doubt that Herfoss was in control prior to the stoppage. Behind the leading trio, following Bayliss’ misfortune, Staring was elevated to fourth and Allerton fifth. In sixth this time around was Waters to complete a difficult weekend, trailed by Stauffer, top of the newcomers Mark Chiodo (Team Suzuki Ecstar), Phillis and Kyle Buckley (Kawasaki BCperformance). Overall for the round Herfoss made it two in a row, joined by Maxwell and Falzon on the podium – identical to the current championship standings, as Herfoss has stretched his advantage to 23 points.