Levy picking up the pace 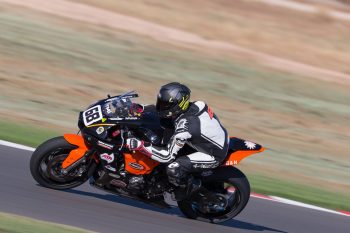 Experiencing his strongest run yet in last weekend’s third 2018 Australian Superbike Championship round at The Bend Motorsport Park in South Australia, Mitch Levy is well and truly knocking on the door for his first top-10 result for the year.

While it’s been a mixed year so far for the Dural, NSW-based rider, with some difficulty throughout qualifying making it challenging to move forward during the races, it certainly improved during last weekend’s third round, with Levy achieving his best qualifying result for 2018.

Travelling to the brand-new state of the art motorsport complex on Thursday, the opportunities were endless for Levy and his team. Displaying good consistency during his two practice sessions, Levy recorded the 14th-fastest lap in both sessions, before returning to the track on Friday and placing 11th in his third and final practice session.

Not quite coming away with the result he was hoping for in his first qualifying session, placing 16th, Levy managed to make amends in qualifying session two on Saturday morning, timing 11th fastest. Taking to the track that afternoon for the first of his three 10-lap races, Levy continued his consistent run, finishing 13th.

Following race two on Sunday morning, which saw him place 16th, Levy delivered a pleasing performance in his third and final race of the weekend and looked likely to crack into the top 10; however, a red flag due to a crash cut the race short, leaving him forced to settle for 11th place.

“It would have been great to break into the top 10, but overall it was a fairly strong weekend for us and finishing just outside of the top 10 is an improvement on previous rounds,” commented the 23-year- old privateer Yamaha rider, whose team made a few electrical changes to his bike which ultimately paid off, giving him added pace.

“We’ve definitely learnt a lot more about the bike this weekend, so now we just need to focus on being able to be quicker earlier on in the weekend to give ourselves the best result.”

In another coup for the team, Levy also picked up the Best Presented Bike award from Australian Motorcycle News magazine.

Currently sitting 13th in the point standings, Levy is now looking forward to his two-month break before contesting the fourth 2018 Australian Superbike Championship round at Hidden Valley Raceway in the Northern Territory from June 28 to July 1.

“We always enjoy racing in Darwin, and we’re looking forward to heading up there in a few months time,” he added.

“The track is slightly similar to Tailem Bend, so we’re hoping that this might work to our advantage, as last weekend’s result was our strongest of the year.”

To find out more about Levy and his team, LIKE them on Facebook by searching Mitch Levy #68.