Podium sweep for Pirelli racers in ASBK at The Bend 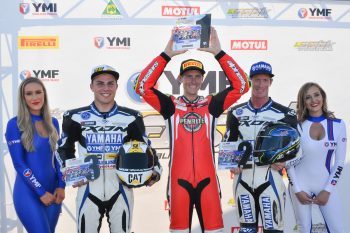 In the premier Superbike division it was points-leader Troy Herfoss (Penrite Honda Racing) who reigned supreme for the second round in a row, qualifying second before going on to register 3-1-1 finishes for the overall. He also claimed a new lap record of 1m52.939s in race two on Sunday.

Herfoss won the round ahead of pole-setter and Saturday’s opening race winner Wayne Maxwell (Yamaha Racing Team), who scored a second and a third to cap-off the weekend. His scorching pole position lap-time of 1m52.175s set on Saturday morning is a new best lap of the technical 4.95-kilometre International Circuit configuration.

Maxwell’s teammate Daniel Falzon (Yamaha Racing Team) clinched his first race and round podium of the year in third, much to the delight of his local South Australian fan-base with 4-5-2 finishes. It was an all-Pirelli top five with Glenn Allerton (Next Gen Motorsports BMW) fourth and triple world champion Troy Bayliss (DesmoSport Ducati) fifth.

Pirelli riders sealed no less than nine positions inside the top 10 overall, with the most popular tyre selection proving to be a combination of the Diablo Superbike 120/70R17 SV0952 and SC2 fronts and Diablo Superbike 200/60R17 SC0 rear through qualifying and the trio of scheduled 10-lap encounters.

In Supersport there was no catching new championship leader Cru Halliday (Yamaha Racing Team), who claimed pole position and controlled all three races for victory in South Australia. Halliday topped teenager Tom Toparis (Cube Racing Kawasaki), who was second in each of the races, with rookie Max Croker (Mladin Racing Suzuki) rounding out the podium in third.

Round four of the 2018 Yamaha Motor Finance Australian Superbike Championship (ASBK) presented by Motul Pirelli will take place at Hidden Valley Raceway in the Northern Territory between 28 June-1 July.