In 2009 Aprilia created a bike, it was something special and it was a bike that was designed to win the World Superbike Championship. Cost was not part of the equation but winning was, so choosing the more expensive 65-degree V4 engine platform was a no brainer. Aprilia then used all of its 52 world titles of knowledge to create an alloy beam spa frame to house the new donk, all in the name of victory. And it didn’t take long for that, with Max Biaggi securing the title in 2010 and then Sylvain Guintoli backing it up in 2014 giving Aprilia 54 titles to date. Although the general layout of the bike has remained the same, the 2018 RSV4 RF (Factory) has a lot more fruit than the bike that first hit the show room floor all those years ago.

Where we rode:
When you are talking big bore superbikes there really is only a handful of places in the world that can really push the limits of the litre brigade. We are lucky to have such a place in Australia, a track that can test all facets of a machine with its sweeping corners, hard braking areas and quick changes of direction. And then there’s that fantastic turn 12 that allows the rider to really wind up the bike and get the rear spinning out on to the majestic front straight testing it to the limit – that circuit is Phillip Island. 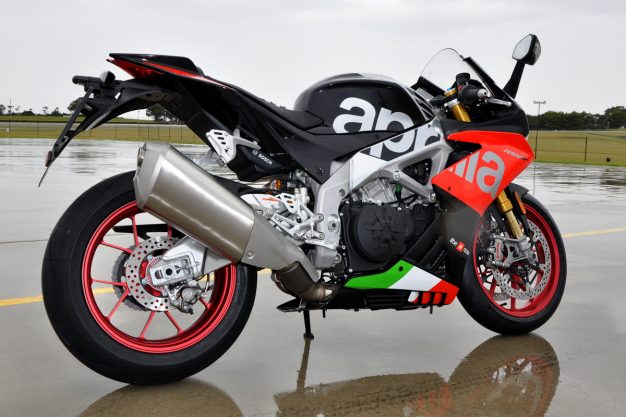 Tech features:
The 2018 RSV4 RF is packed with high-tech software that is controlled by one program, Aprilia’s Performance Riding Control system (APRC). This software is designed to keep the RSV4 safe, stable and fast, a job that it does extremely well. It’s the key to unlocking the RSV4’s inner mojo, so better we understand how it works. APRC relies on information sent by an on-board gyro called an IMU (Inertia Motion Unit). The IMU measures the lean angle acceleration and deceleration, in essence it keeps track of the bikes attitude. APRC takes other information from sensors mounted all over the bike and sends out commands to the ECU which then modifies the fly by wire butterfly position, fuel map and ignition settings to keep the RSV4 within the parameters that the pilot has chosen before he sets off. It’s then possible to make changes to the traction setting, wheelie control (ALC), three choices of maps (Sport, Track, Race) and ABS parameters which are all easily visible and adjustable on the TFT dash. An easy to use launch control feature also uses the parameters and can help track day enthusiasts that want to feel like a GP star when they launch off the line. Aprilia hasn’t forgotten everyday users either with a handy cruise control adorning the bike, helping to make those highway trips less painful. All the programs are adjustable by the easy to use switch block toggle system on the left-hand handle bar giving factory level performance to the normal every day punter. The RF version of the RSV also has some very trick extra goodies that make it special and look as good as it does. It’s fitted with Ohlin’s 43mm NIX Forks that are tin coated, and a fully adjustable rear TTX shock. The bike I rode was set up for the track and the good news is you don’t need to change much to get it ready. An aftermarket fairing suitable for a track day punter was all it took, but just because we could, we also had the Akrapovic full titanium pipe worth $4000 fitted. 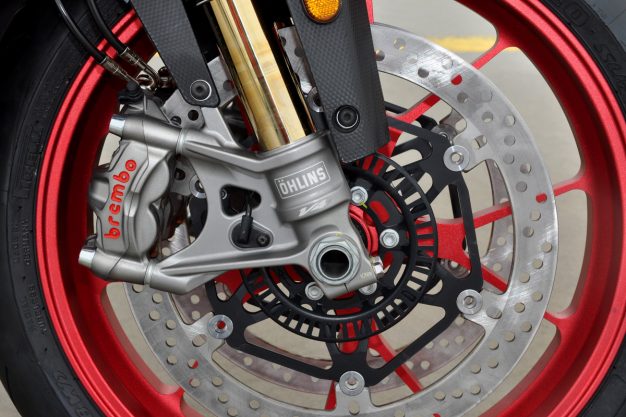 Motor characteristics:
The heart of the RSV4 is its 65-degree V4 motor that is still one of the most compact engines available, even after nearly a decade of service. It’s Euro 4 compliant and pumps out over 200-horsepower with a very linear power delivery. That’s the advantage of a V4 engine – the best of both worlds – an amazing amount of torque plus a blistering top end. The real secret behind the controllability of the Aprilia though is its ability to open the front bank of throttle bodies and rear bank separately, it’s high-tech stuff but being able to do that allows a lot more control of the 201 CV of power on hand and makes it very controllable. I found that the amount of feel from the potentiometer operated twist grip was amazing even in the damp conditions we encountered at the Island on the first day. The FBW really helped me feel the rear tyre grip levels better compared to an older cable operated design. The punch though was just something else, in my first session and without even having a proper go I cracked 303kph down the shoot which is utterly amazing for a street legal machine. Even without all the electronic control the V4 motor feels very user friendly and the silky-smooth gearbox just makes it a pleasure to ride. It’s also fitted with a bi-directional electronic shifter which negates the need to use the clutch on up and down shift. Almost all the superbikes have them now but the neat thing about the Aprilia is that you can upshift and downshift at any RPM with any throttle opening. On the others, the throttle must be closed on the downshift or it won’t work. 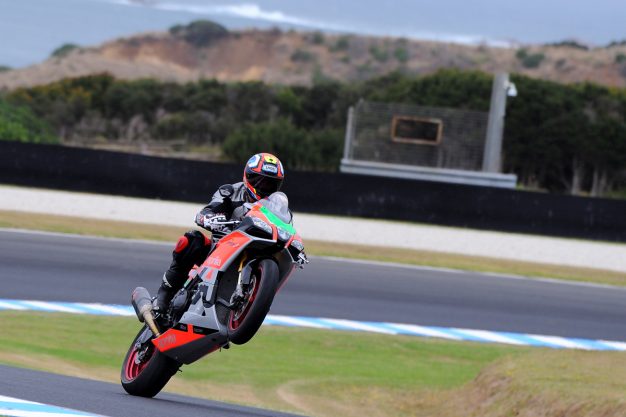 Chassis feedback:
Back in ’09 everybody knew that the Aprilia was special, its DNA was evident from the onset and as we said it succeeded at its job almost instantly. The Spa frame itself is a masterpiece not only holding the rest of the parts of the bike together but by being one of the most adjustable available. The engine position can be altered, the ride height can be changed, the same with the swingarm pivot and even the steering angle is adjustable. Out of the box the bike handles exemplary though, it’s got a very confidence-inspiring feel to it with good standard geometry that suits the Island and that lets the rider feel relaxed when the scenery is buzzing by at light speed. It steers exactly where its pointed and while on board everything feels natural. The braking area has not been neglected, everything stays in line after the rider has squeezed the four-spot mono block Brembo’s and if things do get a bit squirrely, the Rear Wheel Lift Mitigation (RLM) kicks in activating the ABS and brings the wheel back into line. 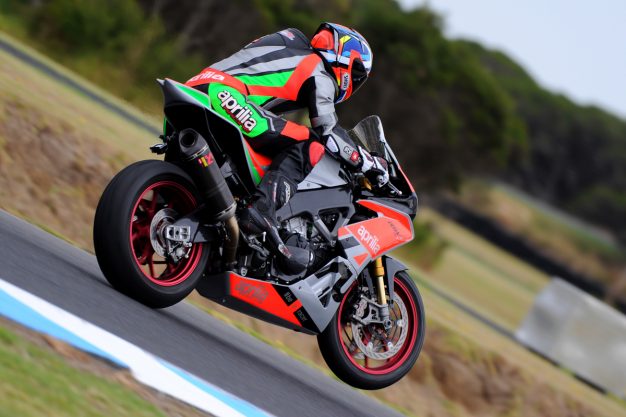 Final thoughts:
It doesn’t matter what aspect you look at – the Aprilia was built with purpose from the start. The RSV4 is heading on to be 10 years old next year but it doesn’t look dated in the slightest. It’s a bike that can match the best of the best in the Superbike world with perhaps the advantage of being a little more exclusive than the competition. Especially when you throw in the RF moniker. Its Ohlin’s suspension trick paint job and lighter forged alloy wheels let your friends know you mean business. The Aprilia RF is a premium product and at $34390 ride away it carries a premium price tag but you do get a lot of bang for your buck. If it’s a bit out of your reach though the RR standard version at $27490 ride away is very good value for money. 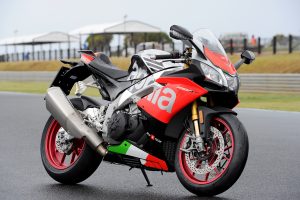 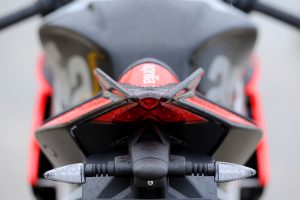 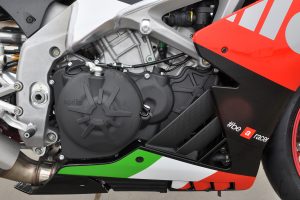 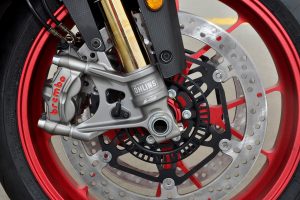 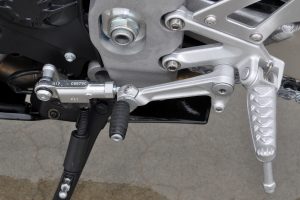 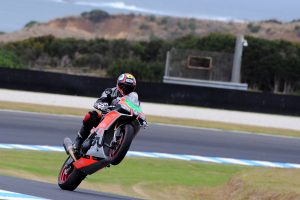 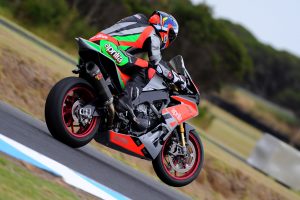 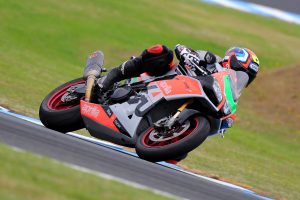 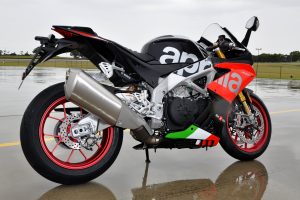 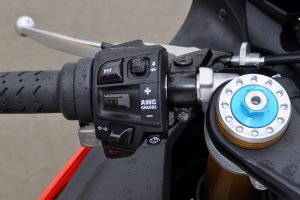 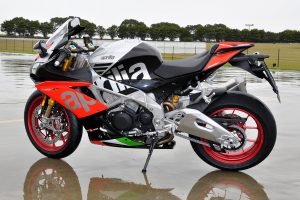