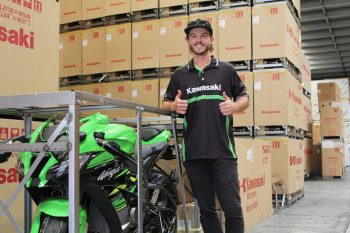 Home-grown motorcycle racer, Glenn Scott will enter the 2018 Australian Superbike Championship (ASBK) from round four with the backing of Kawasaki Motors Australia.

The 26 year old from the Central Coast in NSW, has returned from an international racing campaign and he will be representing himself in Australia under the GSR Kawasaki team. Competing in the Superbike class aboard his Kawasaki Ninja ZX-10R, Glenn aims to settle into the field for the remainder of 2018 and then lead a full throttle charge into a complete season of racing the following year.

“Racing in Australia is where it began for me. I had some of my best results in the years I was racing in the ASBK with my own team. This is why I have begun to build my own race team up again and by partnering with Kawasaki, we hope to be in the mix with the top five riders,” said Glenn.

“The ASBK has built up to a fantastic championship with great numbers and why not be a part of it?”

“I’d like to support Australian racing and support the series here so it’s good to be home and riding in a competitive championship. The ASBK is forming into a championship where riders no longer need to search overseas because the competitiveness is here at home,” Glenn commented.

At a young and tender age, Glenn took to riding off-road. Eventually he began to compete in Flat Track competition and by the time he was 15, Glenn won 8 Australian title and 42 state titles. Once he reached the legal road racing age (15 at the time), he made the transition, going on to win the 2007 Australian 125cc championship. In the years that followed, he went on to try his hand at GP125 in the Spanish championship and achieved top ten results in a class of up to 90 riders. The Global Financial Crisis hit and Glenn made his way back home where he finished 4th in the Australian Supersport Championship (600cc). In 2013, he stepped up into the Superbike class (1000cc) and became the Australian privateer champion under a team managed by himself, receiving podiums against factory riders that season.

2015 was a year that presented an opportunity to step-up into the World Supersport Championship. Completing a full championship, Glenn claimed a number of points and received a best race result of 13th. The following year, a racing injury forced Glenn to sit out the remainder of the season. He picked up racing again in the World Superstock 1000cc series, gathering points several times. In 2018, having missed the first portion of the ASBK championship due to a medical procedure, Glenn is now poised to take on the Superbike class with his Kawasaki Ninja ZX-10R.

“The Kawasaki Ninja ZX-10R is a fantastic machine and I think it can definitely run at the front of the field of the ASBK championship,” commented Glenn.

“Every racer strives for the top step of the podium and that’s what we will do, however we are realistic coming into the season half way, so we will have a bit to learn and build on with the new team and take each race as it comes.”

“The competition is very strong at the moment and the rivals that are lining up have been around for a long time. They have a lot of knowledge of the Aussie circuits, so they are comfortable. After racing in Europe for a few years, I’ve gathered plenty of knowledge and I’ll be able to take the path of least resistance rather than learn things the hard way.”

“The biggest challenge will be sliding back into both the Manager and Racing role at the same time. Having the luxury of racing overseas means that you have a big team around you. In this case I see it as a massive benefit because I am able to build the right team and get the people around me that I want.”

“On the managing side of things, my brother, Greg Scott is helping with securing sponsorship and he has been my biggest supporter since I began racing so it’s good to have him in my corner again”.

GSR Kawasaki will consist of Glenn Scott as the Team Manager and rider, Al Samuels as acting Crew Chief, Adam Raffe will be Glenn’s team Technician on race day and Glenn’s partner, Tamara Sexty will coordinate the team’s PR and Communications activity.

“I’m extremely excited and grateful for the opportunity to go racing in Australia again, with the support of Kawasaki Motors Australia. We have worked very hard to build up to this position and I’m excited to see what we can do to become not only a professional team this year but championship contenders moving forward,” Glenn commented.

Kawasaki Motors Australia Marketing Coordinator (PR, Media and Race Support), Milo Dokmanovic said, “We are pleased to be supporting Glenn Scott in his return to Australian motorcycle racing this year, which will add yet another layer to our supported rider program in the ASBK series. Glenn’s background combined with the formidable Ninja ZX-10R, will provide a solid launching pad and we are excited to see him make an impact!”

Glenn Scott will make his way to round 4 of the 2018 ASBK, taking place on 28th June at Hidden Valley Raceway in the Northern Territory.

For more information on the 2018 ASBK championship, visit the website here – https://www.asbk.com.au/.