Triumph’s Bobber made a big impact in 2016 when it burst onto the scene. Its tough presence meant that it fit right into its niche market sector challenging Harley and Indian for top Honours. It was what was underneath though that helped to win its many fans, with its high-tech interior bringing sophistication to a class where there was none. It became Triumph’s biggest selling retro model and hard to improve on, one would think. That was when we heard about the Bobber Black – it’s more than just a paint job to the existing beast, with significant improvements and styling cue changes making it a step forward. 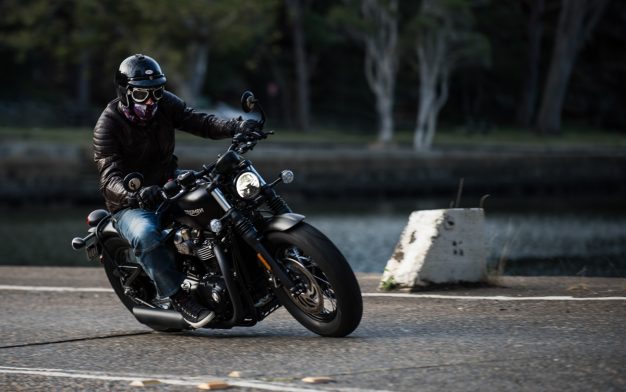 Where we rode:
I like the Bobber and had a soft spot for the old version having ridden it on several occasions. To get the chance to ride the new bike had me pondering the outcome. There were three components put to us on the day – the first a road ride through Sydney’s traffic, which although laborious would let us taste the Bobber in its probable everyday environment. Next was a country run south of Sydney and into the national park, taking in the sights and letting the Bobber loose by getting it out of its comfort zone on the open road and through the tight stuff. When I heard the word drag-strip, I started to froth at the mouth because it’s unlikely too many Bobbers will make it into those realms, but it would give us a chance to thrash the Black to within an inch of its life to A, see if it could stand the severe punishment, and B, have a lot of fun doing it. 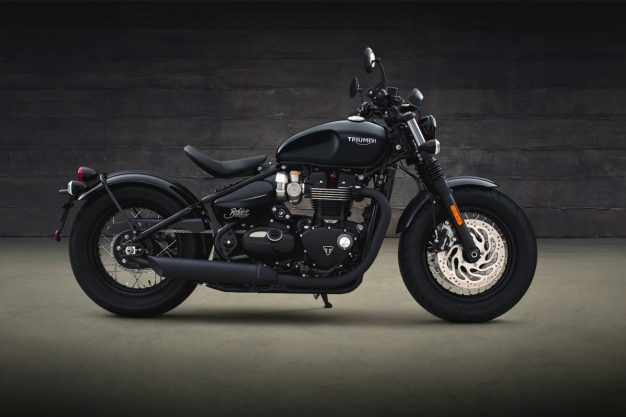 Tech features:
Like the original 19-inch front wheeled Bobber, the new Black has plenty of changes worth mentioning. The main differences differentiating the two machines (besides the paint) is its completely new front-end design. The Bobber Black sports a 16-inch front wheel with a big, fat 130 section Avon Cobra tyre. This modification completely changes the feel and handling characteristics in a good way. Not that the old Bobber had issues, it’s just that the new one is different. Why the change then? Well, simply to meet the new styling cue and that’s a job well achieved because it certainly does look hot. With the new wheel size came more front end refinements with a set of twin 310mm front discs clasped by Brembo calipers being added into the equation. More stopping power is a definite bonus as are the new cartridge 47mm front forks, which really tie the Bobber Black together. Hidden behind the glamour and glitz, the Black sports a one touch cruise control, rain/road map, traction control and a two channel ABS system to keep the Euro 3 compliant machine on line and target every time it’s ridden. It’s also got a nifty old school single clock dash that can be angle adjusted to suit the rider’s preferences. Incorporated in the clock is an LCD readout that shows all the mod-cons like a fuel gauge, tacho, clock, trip meters and fuel consumption figures. Last year’s Bobber didn’t carburate as smooth as it should have, but the fuel injection system’s ECU has had six upgrades fixing the problem completely. The Bobber Black is as smooth on and off the throttle as any high-torque engine gets, and that smoothness added to the special double ramp three spring clutch makes the Bobber easier than ever before to launch from the lights. 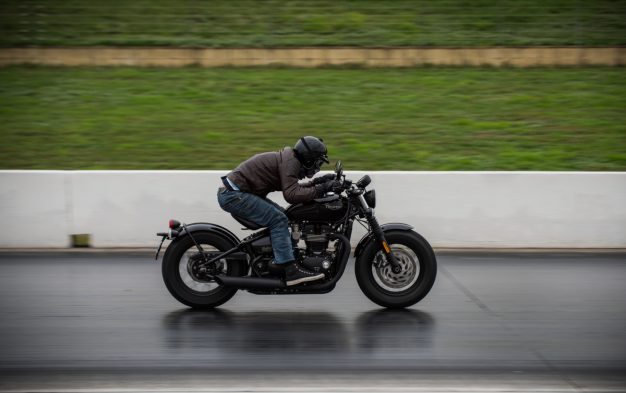 Motor characteristics:
When I say launch, I mean launch – this is one tough engine. Sometimes figures don’t tell the true story and although the Trumpy boasts healthy power and torque figures, it’s the lowness in the rev range where it achieves max power that makes it feel like a drag bike – it’s a lot of fun to ride. The Bobber gets the HT (HighTorque) version of the 270 degree crank water-cooled inline twin. Its 1200cc motor has four valves per cylinder and diametrically opposed balance shafts, which give the Bobber an almost silky smooth ride to a point. The big twin retains the thrill factor that a bike like this needs to have and it’s certainly apparent when you give it a handful at low rpm. The bike rockets away from a standing start as the clutch bites in and shoots the Bobber off the line. The fly by wire throttle system is adjusted well this year and there is a definite difference between the rain and road maps, with the rain map much softer in the lower revs which makes it ideal for the rain or even just when cruising. The gearshift is super smooth and direct with not one missed gear over the course of the day giving me confidence to not even think about changing a gear – it was just natural. The ratios are wide and fifth and sixth are very long. That lets the engine plod along with minimal fuss at whatever speed you are doing. The engine pumps out the same power as the original Bobber at 57kw, but it’s the impressive 106Nm of torque at 4000rpm that makes this bike so much fun to ride. It’s economical for a 1200 too at 4.1 litres per 100km, but with only a nine-litre tank, you won’t be heading to the red centre without back up. 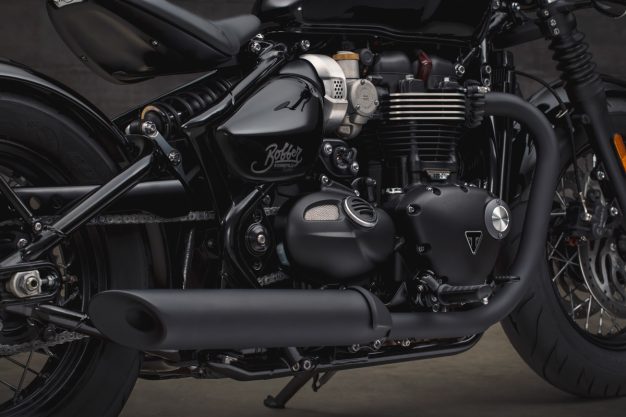 Chassis feedback:
The Bobber is an amazing little bike and the Black version with its 16-inch front wheel didn’t disappoint. A lot of thought went into making this bike in both aesthetics and practicality. It’s got a nice low seat height and a low centre of gravity which makes it such an easy bike to not only ride, but also manoeuvre around the shed or carpark. It’s got an adjustable seat which can be moved to either a back or forward position to suit the rider’s preferenc,e opening the Bobber up to more buyers. The pleasure of this bike though is in the ride – it’s such an emotion evoking bike and probably more so than for any other reason it’s why I like the Black. Once my initial endorphin explosion recovered I could get on with the job of enjoying it and I did. I rode a lot of different variants throughout the day but my favourite was the Bobber with the Ape hangers fitted. Now I’m not an Ape hanger guy but they really suited this bike. Not only in the riding department but also in the riding position. They open everything up and change the seating feel all together. The front end is the biggest difference to last year and the 16-inch Avon front gives the rider a lot of grip and feel. The bike feels like it’s got a very stable geometry that needs a little push to get it headed in the right direction. Just the right amount though to let the rider know that’s where the bikes headed. Ground clearance is limited like all bikes in the class, but it still didn’t stop us from having an immense amount of fun on the bike. The twin discs up front haul the speed down a lot quicker than last year with a lot less effort needed to make the Brembo’s bite. The rear shock is still a bit soft as it was last year and that means it can bottom out on big bumps occasionally. Easy to fix though with a Fox shock being offered as a genuine Accessory, it wouldn’t be hard to slip one in. At the drags was where I got the biggest surprise though. We did about 10 runs on the Bobber and it handled it with ease. There were four bikes running there and not one had an issue. As for the time, 12.35 seconds was my best and the bike surprised me with its speed. 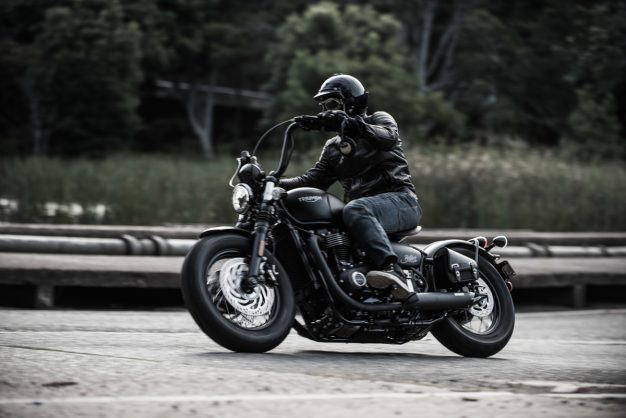 Final thoughts:
Would I buy the Bobber, yes, I would if I was in the market for a bike like this and my reasoning is simple. Triumph has created a raw machine straight off the production line that already looks highly-modified and finished. It’s possible to dress it up with genuine accessories if you want to go to the next level but that’s an individual decision. Its underpinnings are all modern and with that comes safety, easiness to ride and reliability. The last Bobber sold like hotcakes and with the way this one looks and goes I can’t see that changing any time soon. 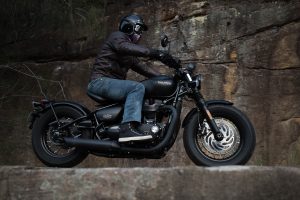 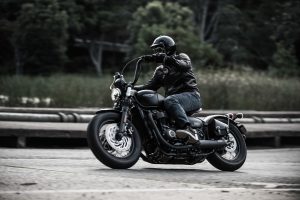 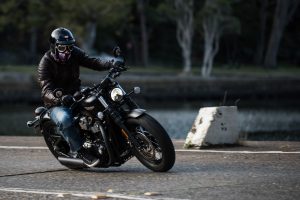 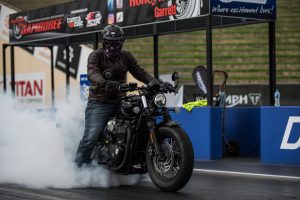 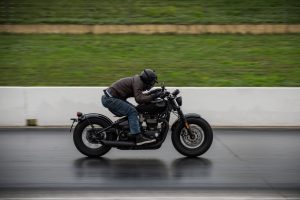 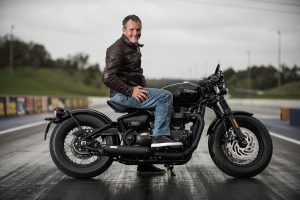 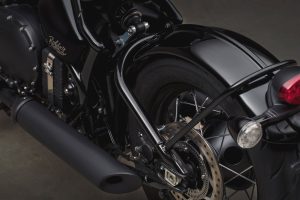 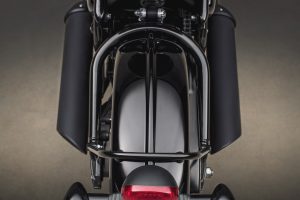 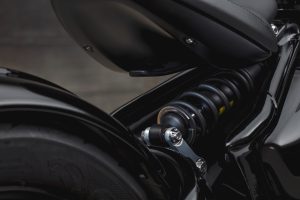 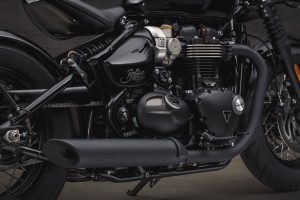 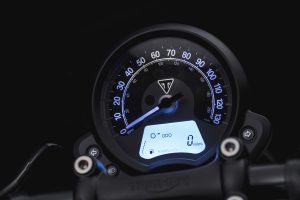 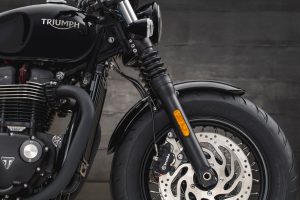 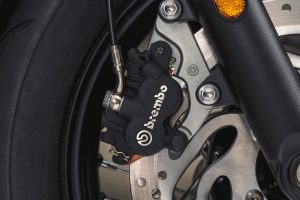 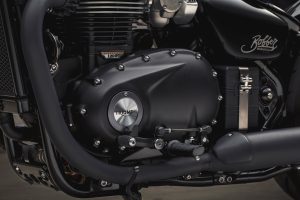 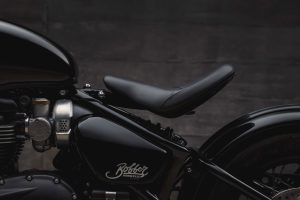 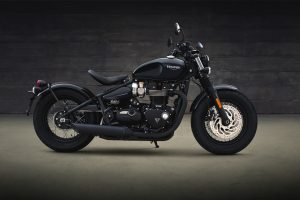 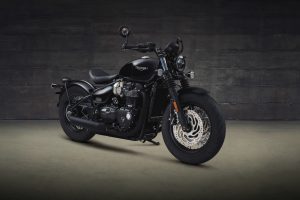