The Bonneville platform has been a massive success for Triumph – the British manufacturer introduced the new T120 a couple of years ago and from that moment forward they have gone from strength to strength. Last year the exhilarating Bobber arrived followed recently by the pumped-up Bobber black, a 16-inch front wheeled version. Just when you thought that they might be having a rest, the latest offering, the Speedmaster showed up. It’s a reincarnation of the old machine (launched in 2002) but this time around it uses Triumphs latest technology and borrows heavily from the Bobber platform – and that means it has chameleon type properties. It can look sexy one minute or carry a pillion the next, unlike the Bobber that is a one person only machine. We are very happy to report though that this rendition is much improved than the previous Speedmaster, being more reliable, sexier and modern underneath while still retaining the classic cruiser style. 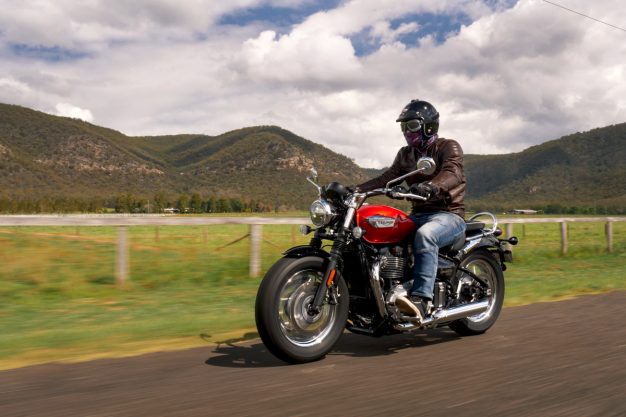 Where we rode:
Triumph were confident the Speedmaster would chew up miles effortlessly, so a massive day of around 400 kilometres, plus photo stops, was planned for us to get to know the new girl. We were guided through some of the best roads New South Wales has to offer with the usual suspects, The Putty road, Old Pacific highway and plenty of Sydney’s notorious traffic to contend with. We had perfect weather for the trip and some fine company, mainly in the name of Triumph ambassador Charley Boorman. 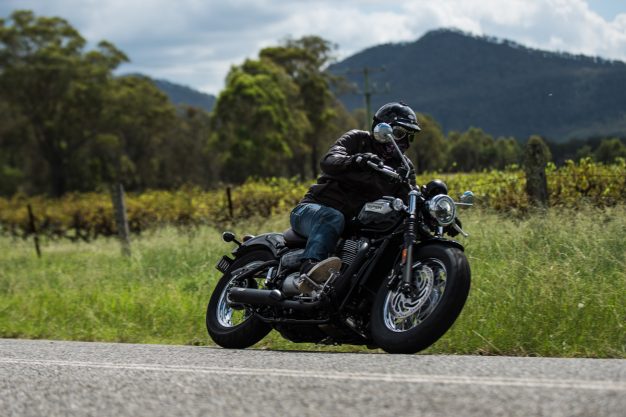 Tech features:
The Bonneville Speedmaster is a take on Triumph’s long custom heritage that dates back to the ’50s. It has a laid-back attitude which transfers through to its riding style. The Speedmaster also has plenty of chrome and detail making it a visually pleasurable bike just to look at, never mind ride. Even though it can be proud of its heritage, its elegance is only part of the story, because underneath the Speedmaster is nothing but modern. It uses the same platform as the Bobber which means it has the hidden monoshock rear-end pretending (and doing a good job) to be a hard tail. It also sports other modern niceties like Brembo callipers and twin discs up front, modern geometry and a cartridge fork, and when that’s added together with the rest of the package you end up with a very comfortable safe machine. It’s safe because it’s packed with electronic goodies to keep you out of trouble, like Bosch ABS, Triumph designed traction control and even a cruise control button to help reduce fatigue and improve concentration levels. Throttle response is taken care of by a ride by wire system which allows a very smooth power delivery and there are also two maps, obviously a sporty one and a more mellow map for rain or just taking your time. In this world of uncertainty Triumph has taken security seriously with the Speedmaster being fitted from the factory with an immobiliser as standard equipment. Some of these systems can become expensive if you lose the key but with the Triumph system, it’s just the cost of a key and a reflash which is relatively inexpensive. Probably the neatest feature on the Speedmaster though is its ability to lose the rear pillion seat, which changes the personality of the bike greatly giving it a very cool bobber look. Two bikes in one – not bad. 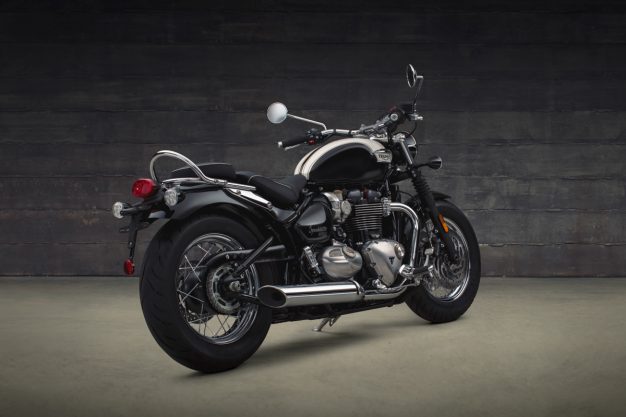 Motor characteristics:
The Speedmaster uses the same Bonneville 1200 HT (High Torque) engine as the Bobber and Bobber Black. The liquid cooled, eight-valve, SOHC, 270-degree crank, parallel twin engine has been powering the classic range now since inception in either 900 or 1200 guise, and it really is a perfectly designed motor for the job. The 1200 HT pumps out 106Nm at 4,000rpm giving it a class leading edge, but it’s where the torque hits that is important. Its flat curve from virtually 2500rpm means that this twin is at home one or two gears higher than what you would think. It loves working away at low revs and lugging the motor enhances the sound and feel of the ride. Its peak power output of 77PS at 6,100rpm is on the low side considering it’s a big 1200cc, but Triumph’s design crew were never after numbers from the onset, but rather throttle one to one feel and the builders got it right. The power that’s there is certainly in your hand and when it comes time to overtake all you need to do is twist and bang you are off. The Speedmaster has up to 10 percent more torque and power than the current generation Bonneville T120 proving that development never really stands still and another positive is that the continual re-mapping of the ECU from model to model, and even at service time has smoothed the connection out beautifully making throttle application a pleasurable affair. Keeping vibration at bay is a set of diametrically opposed engine balancers which work in unison to give the donk a certain feel. It’s by no means vibration free, but rather perfectly rough. Just enough engine feel makes its way to the rider to make this one emotional ride. 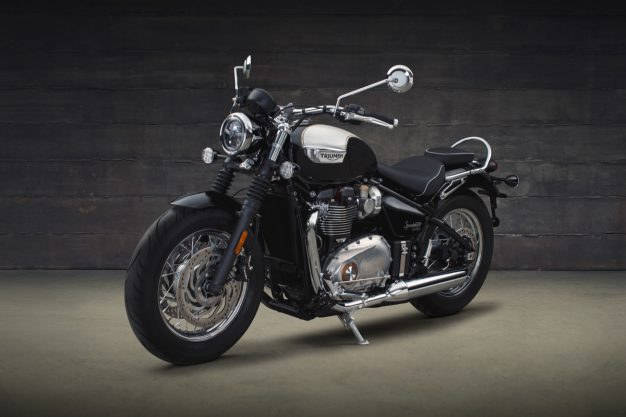 Chassis feedback:
The first thing that strikes you when you climb on board of the Speedmaster is the very English seating position accentuated by the wide beach bars. As soon as I sat on and took control, I felt like an English gentleman about to head off on a sunny afternoon jaunt through a set of English country lanes. Unfortunately, Sydney peak hour traffic isn’t so romantic so contending with that was the first test. I have to say the upright position made for a comfortable ride in the traffic allowing me to have good judgment of where I was and where the traffic was. We didn’t lane split much but it was an easy bike to do that on even with the wider than normal beach bars and the forward set pegs. When the road opened, we had the opportunity to use the cruise control which worked well with my only criticism being the fact that there was no plus or minus acceleration and deceleration. I must say though that having cruise is a great asset allowing the rider to travel further and it’s easy to use. We had our first stop at Grey Gums Cafe and everything was feeling pretty comfy. The rear end seemed to absorb bumps well (even with its relatively short stroke) and the cartridge front matched. The seat was good too, more comfortable than I imagined. After our first stop we hit the mountains and the bike rode very well for its design. There were plenty of times where the pegs scraped but no moments that had me worried. The Speedmaster handles the mountains with ease but you need to respect it, it’s no sports bike. Thank goodness for that because that is definitely not in its design brief. The throttle is smooth and the twin disc brakes stop amazingly for a bike in this category. We had Charley Boorman along for the ride and the trip back down the Old Pacific highway was a ripper. Even Charley, who badly broke his leg a year ago, wasn’t complaining about the comfort of the Speedmaster. 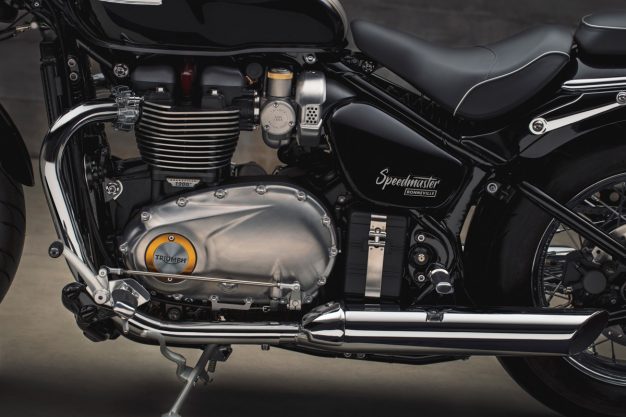 Final thoughts:
The Speedmaster is extremely good at providing an enjoyable ride without having to push it to the limit. At the legal limits, it’s an absolute joy and an ideal mount to take a pillion for a Sunday cruise. It’s a practical bike too with a bigger tank than the Bobber, but at the same time a similar look. Triumph sell two inspiration kits which change the face of the bike feasibly making three bikes in one. The Highway kit and Maverick kit can be added to the base Speedmaster to achieve the look and feel you desire. If you’ve never held a set of beach bars in your hands before, get to it. 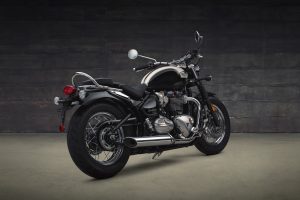 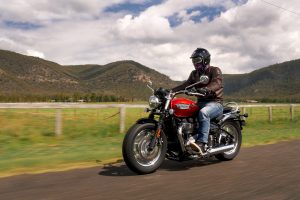 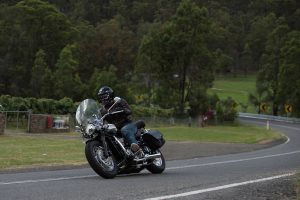 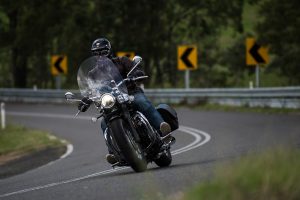 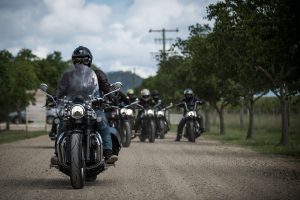 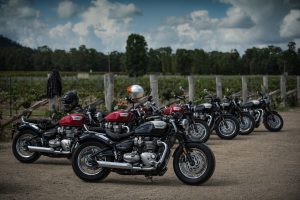 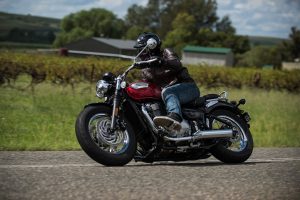 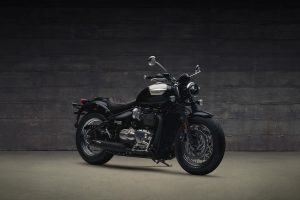 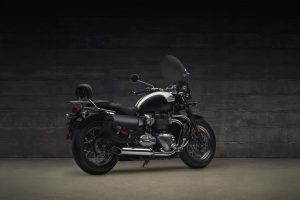 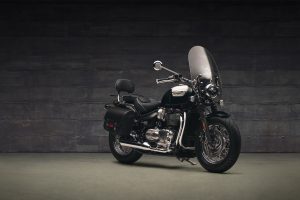 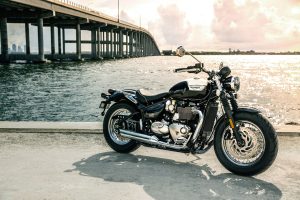 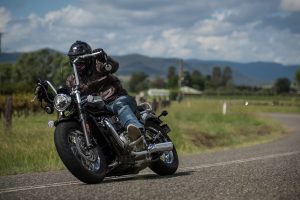 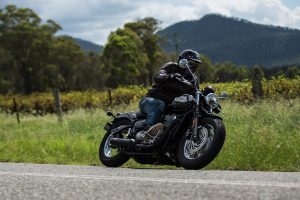 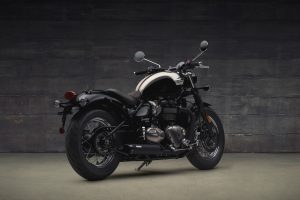 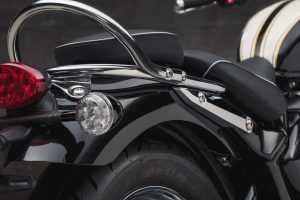 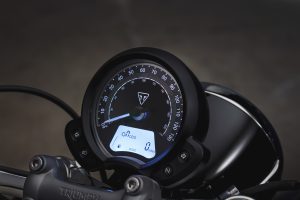 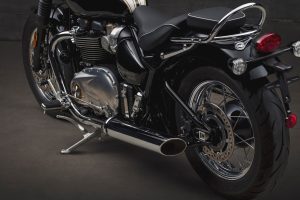 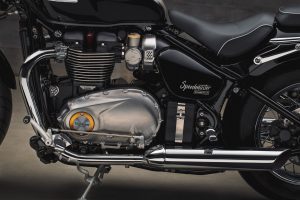