The Triumph Tiger 800 range has received more than 200 changes for 2018, making them friendlier to use yet livelier at the same time. The core technology remains the same with the basics remaining unchanged from last year, but it’s for that reason we have come to love the Tiger in the past and those 200-odd changes made this year play a big part in moving forward. An improved version of the inline triple engine is retained with plenty of tweaks, while the rest of the package has had the magic wand waved, giving the XR and new XC a sharper overall feel. Improvements in the electronic adjustability and usability help both Tigers adapt better to their environment and in general make the rider more comfortable. 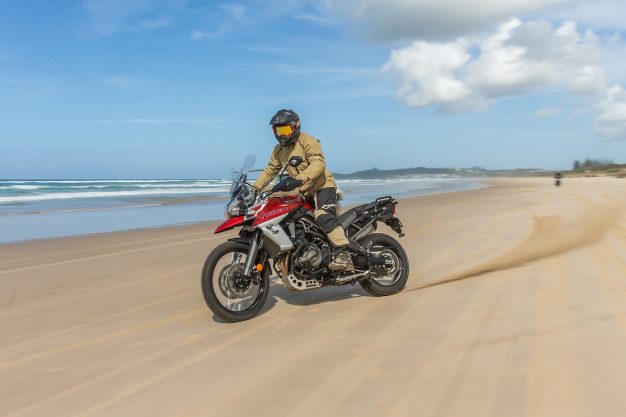 Where we rode:
The old 800 is one of my favourite bikes, so having spent nearly a year on the 2017 version of the XC, I was well in tune with what to expect from this new beast. I wasn’t sure about the XR though, being more road orientated and having never ridden one I wasn’t sure I got it, wouldn’t you just buy the XC? After spending 200 kilometres on the back roads heading to our destination of Collins Creek just north of Kyogle in New South Wales made me completely understand the whys and hows of the XR, and then a 100-kilometre off-road route on the XC allowed me to appreciate just how much better it is compared to the ’17 model. 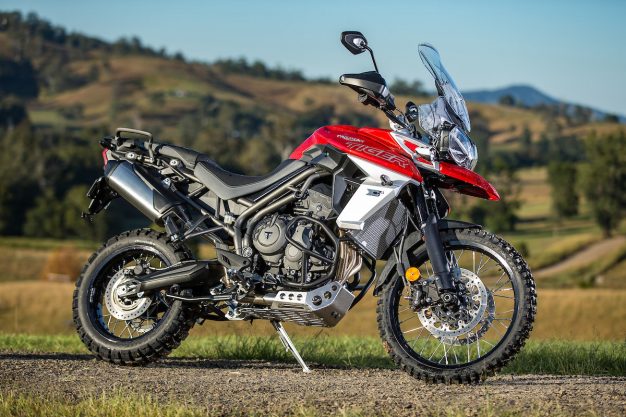 Tech features:
This year there’s a lot to talk about because the ante has been upped significantly in what is becoming the most important aspect of owning any motorcycle. The XR and XC always had the major tech items covered, sporting cruise control, heated grips and seats, different maps, traction, ABS and a tonne of different recorded information, but the truth was that to get into those maps and digest the information was hard work. It required a masterclass of fiddling knobs and switches in the right order to get what you wanted to show up on the dash. That’s all changed now with the new TFT dash and switch block control system making it so easy to scroll to whatever application you are trying to play with. The fly by wire operated maps are better thought out this time around, with the XC getting Enduro Pro, making a total of six choices. The XR has five (no Enduro Pro), but the rider map is fully adjustable and the owner can personalise every setting he or she may want. The dash though is truly the centre piece of this bike now and even has an option of showing the information in six different ways, you’re guaranteed to never get bored whilst whittling away the miles. The good news if gimmickry doesn’t wash with you, is the fact that all the functions work to a higher standard than before. Everything is smoother and more controlled and that allows you to ride the bike closer to the limit in a controlled fashion. Overall there is a significant difference between the ’17 and ’18 models in the tech department, making changing up a worthwhile thought. 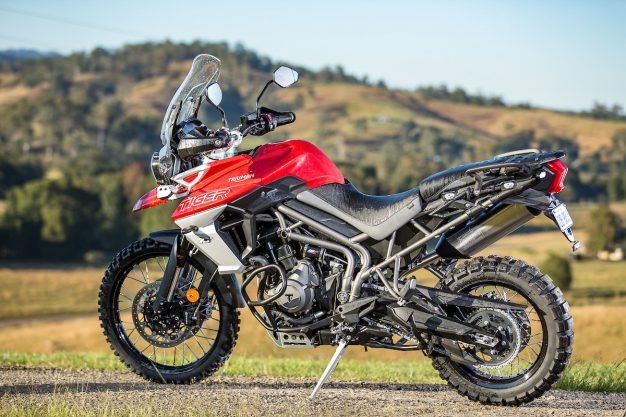 Engine characteristics:
Although there’s a claim of over 200 changes between the 2017 and the latest 800 Tiger, there has been minimal need to modify too much inside the engine. The 800cc liquid-cooled triple has always been a reliable solid powerplant with all the major components tucked up out of harm’s way. Triumph pretty much got it right out of the box, therefore it’s unchanged from a performance point of view with the same cams and pistons churning out 70kw of power and 77Nm of torque. It’s not completely the same though, with some much-needed attention in two areas. First gear has always been on the high side, so it’s been lowered by 12-percent and that gives the motor a new burst of life. It’s much punchier than the ’17 off the line and when you add the new lighter, free flowing pipe into the equation, the best just got better. The gear back lash has been taken out of the motor also by reducing tolerances, and now the 800 triple has a completely smoothed out and controlled feel while maintaining its throaty rasp and signature feel. 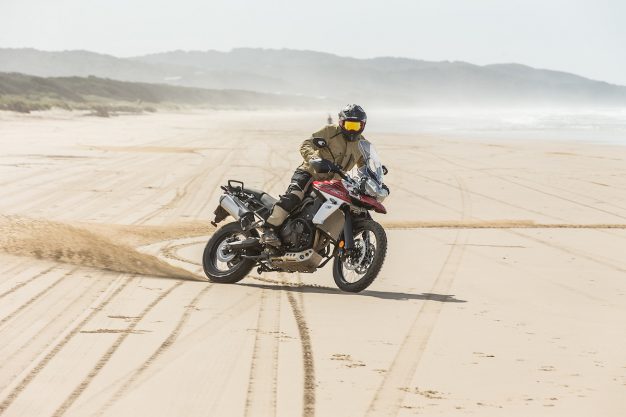 Chassis feedback:
I’ve never ridden the XR version before the test, and after knowing how competent the XC was on the road, I wasn’t sure going in that I would understand why people would want one over the more off-road focused variant. As we started our journey I was instantly impressed by the new first gear and how much easier it was to navigate through the stop start we call suburbia. It made me realise how tall the gearing was on the last bike, so that was a definite plus for the XR there. The balance was good straight off and the seat height relatively low for a bike of this stature. It feels like a mid-sized bike to ride but it’s not until you ride the 1200 next to it that it feels that way. It’s very competent through the traffic and offers very good vision. The cruise control is easy to work too making it simple to stab on whenever cruising in police infested areas. Once out onto the freeway I really started to enjoy my time on the bike and also some of the advantages this year. There’s a different riding position that feels more comfortable with less reach to the bars giving what feels like less pressure on your back. Also, the road biased tyres are much more user friendly and quiet compared to the more off-road versions on the XC. I was starting to understand now why these bikes are so popular, but surely when we hit the dirt I would want my XC? Surprisingly the XR, road tyres and all, handles dirt roads with ease. The balance of the XR gave me a good feel of the road surface grip whilst the traction and ABS worked a treat at keeping me in a straight line. You wouldn’t want to go too far off the beaten track with the standard tyres but they worked pretty damn well. The big advantage the XR has though is when you are on twisty bumpy greasy roads. We found plenty in outback NSW and I’m not sure there is a better bike than the XR under these conditions. With its torque and chassis offering great feed back to the almost perfect throttle connection it turned a scary ride into a fun day.

The XC is a bike that I’ve spent a lot of time on in the past and had so many good memories with. It wasn’t perfect though with its laborious switchgear and hard to use map system becoming annoying at some points. Then there was the super soft saggy suspension which is great if you wanted to ride on the road all day but it bottomed out pretty quickly if the going got rough and dirty. A few guys I know have modded the suspension on the previous model which improved the ride, but thankfully this time around the bike comes stiffer from the factory. The off-road ride feels much more taught than the standard ’17 model ride and that has also helped with its off-road precision. I found the XC 800 much easier to hold a line on rough terrain and the biggest difference was in the sand. The old bike seemed to have a mind of its own as it wandered on whatever line it felt like but now the front is solid and much more confidence inspiring. The addition of the Enduro Pro is a plus too, it works well letting the bike spin and slide but when things get a little wild the traction cuts in and saves your butt. It’s much better than last year when you had to turn it off all together or you would hardly move forward. The new five-way manually adjustable screen is a great addition letting you have better vision off road when its down or great protection when it’s up on the freeway. 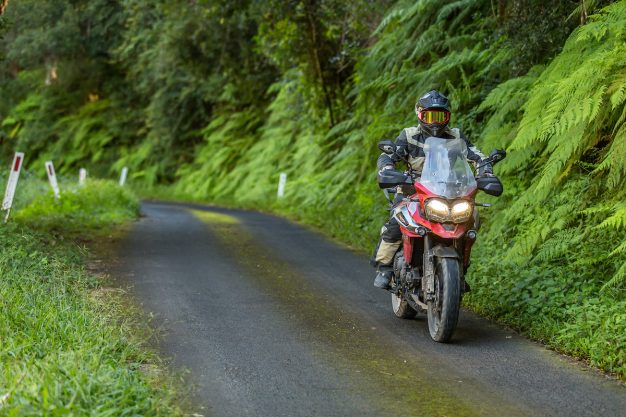 Final thoughts:
The new 800s are so much better it’s not funny. The bikes as a whole have a better feel and a sharper look than in the past. This year is not just a paint and polish model, but one that’s had a lot of thought go into it. The Tiger 800 has always been a favourite with almost a cult following and with these 2018 models better in every way, I’m sure that will continue. There’s a bike for everyone too with five different versions on sale down under starting at $18,500 for the XR and low seat version up to the most expensive XC which we have tested here. 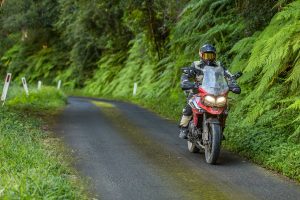 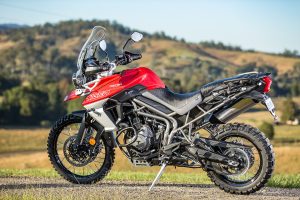 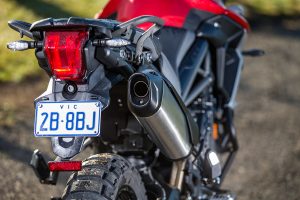 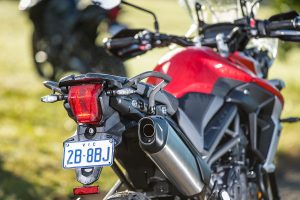 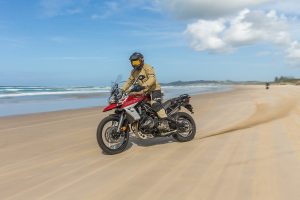 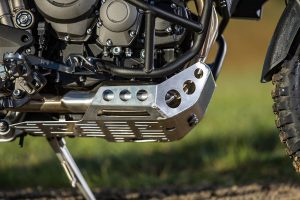 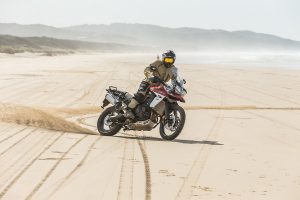 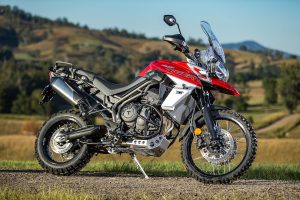 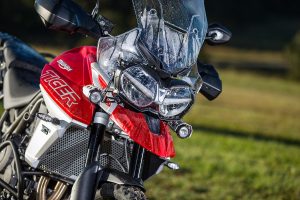