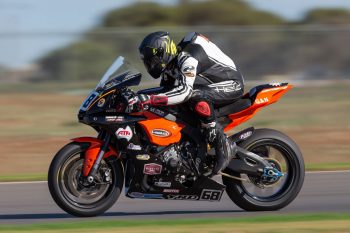 Mitch Levy and his team will be riding a wave of confidence heading into the upcoming fourth 2018 Australian Superbike Championship round later this month, with performance motorbike company Race Center having recently come on board to work with Levy’s long-time crew chief Darryl Higgins in the development of the team’s electronics.

Having previously struggled for grip and subsequent pace during the second championship round at Wakefield Park Raceway (NSW) back in March, the Dural, NSW-based rider approached Race Center’s Managing Director Darren Sciberras, whose support, together with Higgins’ expertise, in round three at The Bend Motorsport Park in South Australia saw Levy improve dramatically, coming significantly closer to achieving a top-10 result.

“A lot of our bike technicians are actually also riders who are expertly trained in bike setup variations, so not only do we offer setup preparation, we also offer trackside support on race day working directly with a rider’s team, which can be hugely beneficial,” explained Sciberras, whose company is based in the Melbourne city of Brunswick in Victoria.

“Mitch and his team definitely exceeded expectations in the last Australian Championship round and we’re confident that with continued setup assistance, they can crack into the top 10 in the upcoming round.”

With his bike having just returned from Melbourne in readiness for round four, which is set to take place at Hidden Valley Raceway in Darwin, NT from June 28 to July 1, the 23-year-old privateer Yamaha rider is looking forward to seeing what he can achieve when he and his team head to the track with the Race Center team by their side.

“I’ve known Darren for a long time and I couldn’t be happier that Race Center has decided to come on board and help us out this year,” said Levy, whose outing at Hidden Valley Raceway in last year’s Australian Championship round was an impressive one.

“After such an encouraging campaign in round three, I’m really looking forward to round four. I’ve got no doubt that the knowledge of Darryl, who has been somewhat of a mentor for me and who has looked after my mechanics and suspension for the past five years, along with Darren and his experienced team will assist us in building on our past performance to come away with a positive result.”

Established in 2014 in an effort to give riders access to significant setup knowledge and assistance, Race Center has since built a reputation as one of the country’s prominent motorbike performance companies. With over 40 years of experience at their disposal, the team can assist with dyno tuning, suspension, engine performance and much more.