Triumph’s Tiger Explorer 1200 range has been one of the top choices in the big bore adventure sector, especially if your main focus is road miles with the odd off-road jaunt. On the tarmac the 2017 models proved to be armchair comfortable and were packed with plenty of technology to play with that lessened fatigue and featured improved safety. Last year’s big Explorer erred on the road side of the spectrum, instead of having the off-road capability of perhaps the KTM 1290 R or the all-round factor of BMW’s GS 1200 had, and that’s something that has been put right in 2018. The new bike has a raft of changes which lets the XC range be far more capable off-road while the XR is just a better all-round and sportier machine – both retain their brilliant comfort and road manner. 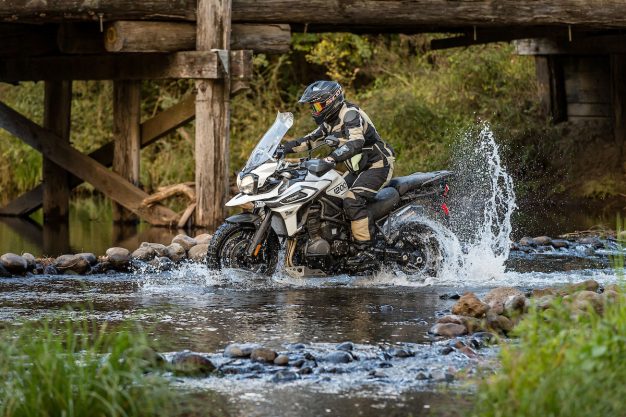 Where we rode:
There’s some beautiful country to be seen in Australia, but a place I hadn’t been to before is the northern New South Wales hinterland, which proved worthy of testing both the 2018 XC and XR top-spec versions of the Explorer range. Being a multi-bike test, we also had similar versions of the 800 on-hand for comparison and two distinctly different tracks, one suited to the XR and one the XC. We were lucky with the weather having a dry run, but one day we didn’t get back till dark, which proved just how much fun we were having on these bikes and let us test things like the LED lights, the back lit switch blocks and the lean-angle derived lighting system. 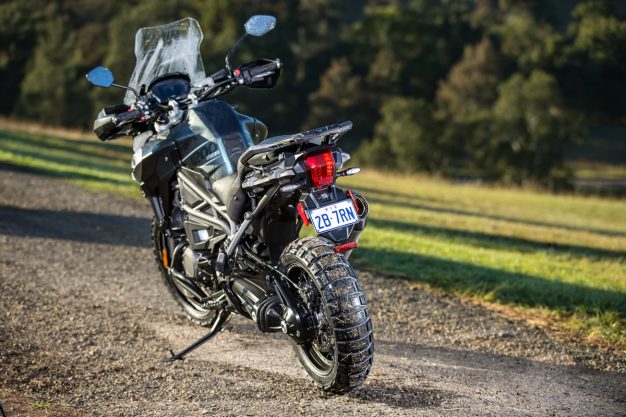 Tech features:
Both the XC and XR versions share the bulk of the change for 2018 and Triumph has made a concerted effort to improve every aspect of the bike, from handling through to user friendliness. This new-found ease of use has been found in a manner of ways, but at the top of the list was reducing weight. Both the XC and XR are significantly lighter for 2018 with a 10kg weight reduction making a marked difference to the overall handling. The engine has also had a significant upgrade producing more urge but keeping rideability and smoothness at the forefront. 2018 sees a complete modernisation of the electronics package of the bike too with adaptive cornering LED lights, a coloured TFT dash, keyless ignition and Triumph’s shift assist making their way onto the new machines. New switch blocks are fitted with a five-way toggle button that allows the easy adjustment of the maps and comfort settings including the electronic suspension with ease. To be truthful, this is probably the biggest major plus for the bike, turning what was once hard work into a dream. Both bikes still have the adjustable height screen, heated front and rear seats and heated grips which make the Explorers super comfortable and warm in the middle of winter. Cosmetically the 18 models look sharper too with updated lines, new wheels, new colours and a different graphic package. The brain behind the braun is improved too with an updated ECU working in unison with a six-axis IMU to make sure the computer knows every angle and every input to the machine the bike and rider give. With this information, decisions are made on how much throttle traction and even ABS are needed at a given time making the Explorer safer than ever before. 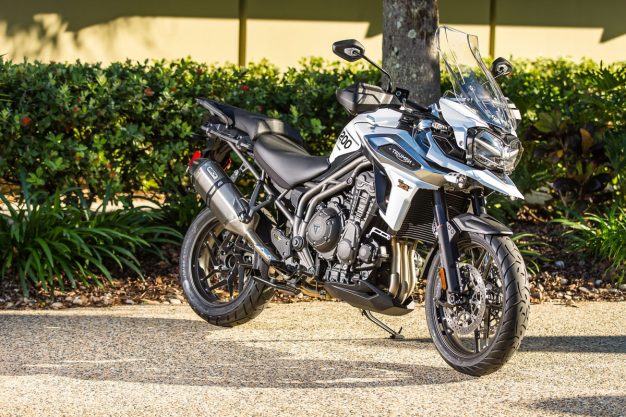 Motor characteristics:
The 1215cc inline triple-cylinder engine has been substantially upgraded this year with a much zappier feeling than in the past. It was always a powerhouse but now there’s a burst of thrilling torque ready to put a smile on your face from the moment the throttle is twisted. This is the result of weight being stripped from the flywheel and added to the lower overall weight of the bike, increasing the power to weight ratio and the pick-up speed of the lighter internal components of the motor. The shaft drive omits the need for chain maintenance and helps give the 1200 its signature growl whilst on board. With 141hp on tap, it tops the class in the shaft drive model horsepower race, but most importantly it’s still very controlled to ride – especially when you start playing around with different map settings. A choice of five on the XR and six on the XC (extra enduro pro) allow you to tune the bike from pussy cat through to thrill seeker. The good news for those of you thinking about the XC is that the enduro pro setting works well, letting the bike spin and slide in the dirt up to a point but then taking control of things before they get out of hand. The off-road ABS does a similarly good job of not freewheeling if things get slippery like less sophisticated versions might. The gearing remains the same as last year and gives a good spread of choice, meaning a gear for every occasion is at hand. The gearbox is now a pleasure to use too with the introduction of Triumphs quick shift system that allows clutch-less upshifts and downshifts. All that’s required is a tap on the lever and the computer does the rest – thank god for technology. 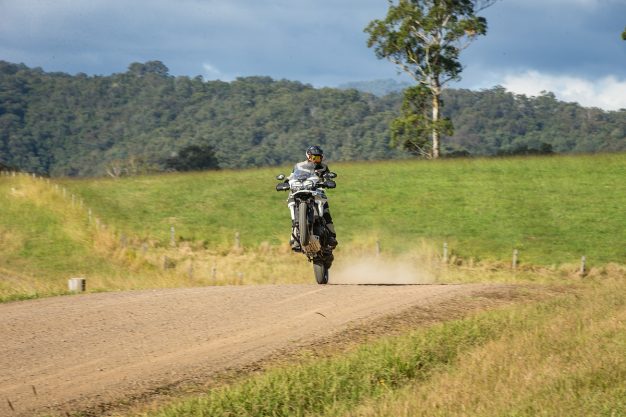 Chassis feedback:
I had been riding the XR 800 in the morning on day one of our two-day trip and was happy with its comfort and versatility. It had everything a rider could ever wish for with good looks and decent performance. I was worried that when I jumped onto the XR 1200 I was going to struggle to feel much of a difference between the two bikes. Wrong, from the first time I let the clutch out I realised just how different the 1200 was. The extra money and capacity of the big bike gives you a whole lot more. It’s much more comfortable than even the already comfortable 800, and much more luxurious. It is also a technological masterpiece now with its easily and infinitely adjustable electronic suspension, traction control, and performance maps being able to be adjusted on the fly by the toggle on the left switch block. No more having to stop, get the manual out and try and figure out what switch to flick next. This bike is made to travel long distance over rough roads in absolute comfort and it’s something that Triumph has worked hard at to achieve. There is plenty of wind protection with the massive electronically adjusted screen and overall the XR seems much more composed and fuss free. It’s very neutral with its handling characteristics, a trait that makes it confidence inspiring to ride. We did a little off-road with the XR too and it was more than capable of tackling dirt roads and even a couple of small river crossings. The limiting factor though was the on-road orientated tires fitted to the bike – if you want to go deeper into the bush, buy the XC or change the tyres.

The 2017 XC was probably a little too road orientated and that may be one of the reasons it’s suffered against the GS range in the past. Well, Triumph has worked hard to put that right for this year and I have some good news to report. The XC for 2018 has a much broader scope due to its lighter weight, better electronics package and improved off-road handling characteristics. It feels almost the same to ride on the road as the XR with perhaps slightly louder tyre noise from the more aggressive tread pattern fitted for the dirt. Where the old bike though felt heavy and a little unsteady in the front off-road, the new bike is sorted. It’s never going to go the places an 800 can, but it’s now a wider spectrum machine. I rode the XC on a brilliant mountain pass which lead in to some dirt track with some slippery surfaces. At the start of the ride I was having so much fun spinning the rear and power sliding with the traction control turned off, but then as I wanted to think less I popped on off-road pro. It really was mind blowing how helpful it was letting me relax and gave me a feeling of control that wasn’t there last year. I could make the rear spin to a point and it would stay there and never felt like it was going to come around and spit me off. It was super comfortable too with the hours disappearing without a sense of discomfort. In fact, we were out so long it started to get dark, but luckily the new LED lights are amazing. It’s got the lean angle activated lighting system to which helps see around the corner further by altering the angle of focus depending on lean angle. I felt much more competent in the off-road stuff on the new 1200 than the old one. 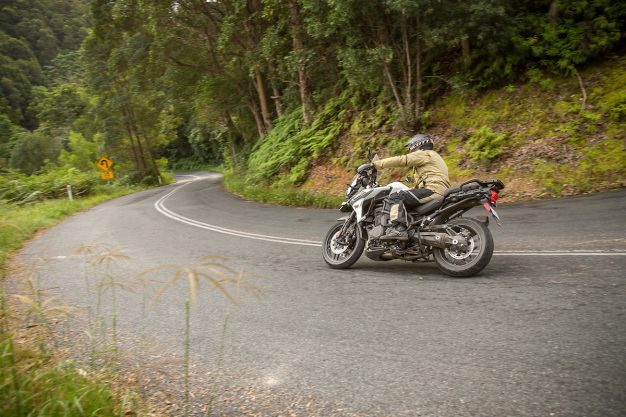 Final thoughts:
There is certainly plenty of opposition in the 1200 adventure class with just about every bike on the market boasting top of the range everything. In 2017, it might have been an easy choice to cross the Explorer off the list of potentials for one reason or another, but that’s not the case now. These 2018 models have focused on real world improvements and those improvements shine through making these bikes the best 1200s to wear the Triumph badge. 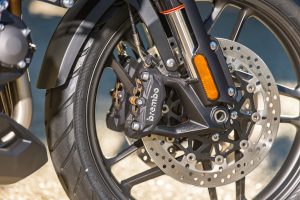 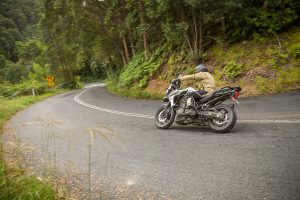 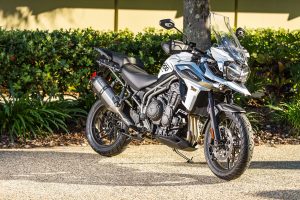 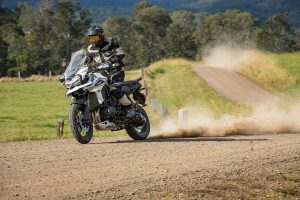 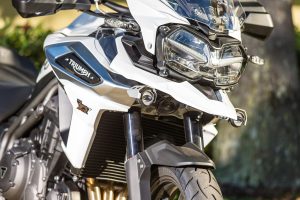 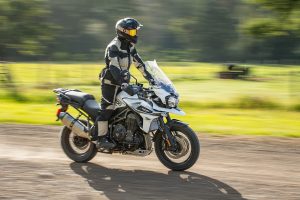 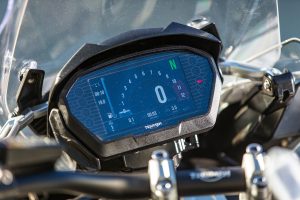 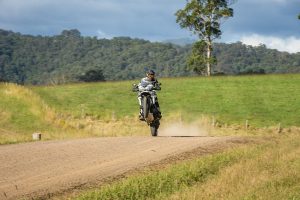 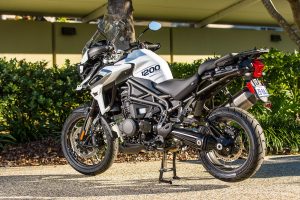 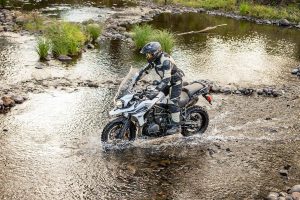 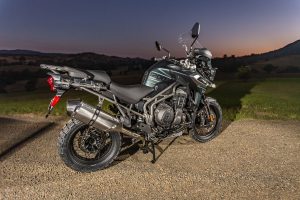 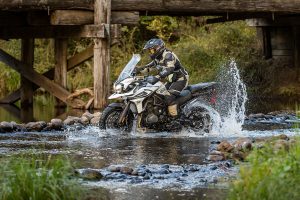 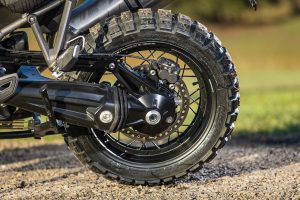 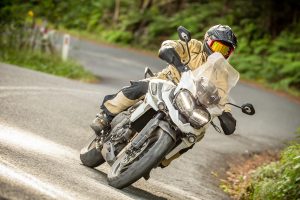 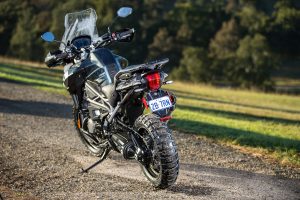