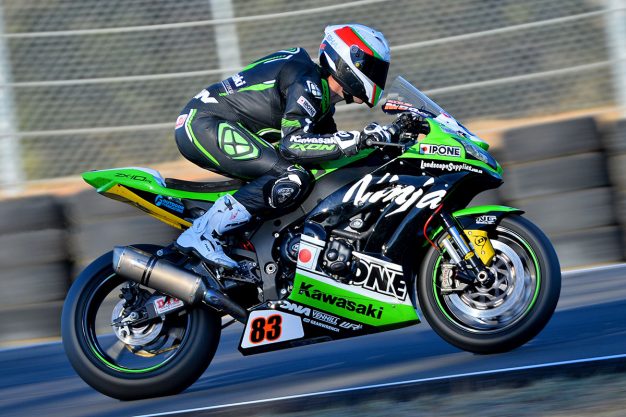 Kawasaki Supersport race one:
Yamaha Racing Team’s Cru Halliday captured his eighth race victory in a row in the opening Kawasaki Supersport encounter, once again proving the dominant force on his factory-backed YZF-R6. The initial 14-lap race was stopped due to a crash from Giuseppe Scarcella (Kawasaki) while Halliday was out front early, making for a 12-lap restart. Honda-mounted Damon Rees led once the race resumed, however it was Halliday who stormed through to the front of the pack by the end of lap two and sprinted away to a 4.944s victory across the line. Behind him, Rees managed to hold the returning Callum Spriggs (Yamaha) at bay for the runner-up, with Max Croker (Suzuki) claiming fourth and narrowly ahead of Lachlan Epis (Yamaha), who completed the top five. Sixth was a disappointing result for Cube Racing’s Tom Toparis (Kawasaki) following an off-track excursion, as Broc Pearson (Yamaha) also ran off on his way to seventh. Zac Johnson (Yamaha), Brian Houghton (Honda) and Scott Nicholson (Suzuki) were the top 10. Halliday posted a new lap record of 1m15.057s in the process.

YMI Superbike race one:
Championship leader Troy Herfoss (Penrite Honda Racing) has extended his lead following a hard-fought victory in race one, overcoming a determined Troy Bayliss (DesmoSport Ducati) on the penultimate lap. It was Herfoss who led the field away from pole position, however a sizeable crash two laps in involving Josh Cavenagh (Kawasaki) saw a short race stoppage. A 14-lap restart was then put in place and from that point it was on, with Wayne Maxwell (Yamaha Racing Team) leading the opening two laps, only for Bayliss to come storming through. It appeared the triple world champion would power away at that point, posting a new lap record of 1m13.015s, but a calculated Herfoss put the pressure on and made his move on lap 13. That’s how they remained, Herfoss winning by 1.083s over Bayliss and Maxwell, who in turn held reigning champion Josh Waters (Team Suzuki Ecstar) at bay for position. Daniel Falzon (Yamaha Racing Team) filled the top five, followed by impressive privateer Matt Walters (Swann Insurance Kawasaki), Bryan Staring (Kawasaki BCperformance), Corey Turner (Honda), Alex Phillis (Suzuki) and top rookie Glenn Scott (GSR Kawasaki). Notable non-finishers included Kyle Buckley (Kawasaki BCperformance) and Arthur Sissis (SA Demolition & Salvage Honda), with Mark Chiodo (Team Suzuki Ectar) credited 21st following a crash in the mid-stages.

Kawasaki Supersport race two:
Race two of the Supersport category was a tighter affair this afternoon across the 14-lap duration, however it was Halliday who again proved too strong on his way to a 3.263s win. After a difficult first encounter, Toparis came out firing this time out and led the first three laps, going back and forth with Halliday in an entertaining dual that saw the latter lead lap four. It was then Toparis, determined to counter-attack each time Halliday made his move, who led laps five through eight until Halliday finally took control and went off to his fourth overall win in a row. Behind the leading duo was Spriggs in a consistent effort, fending off Epis and trailed by Pearson, Rees, Johnson, Chris Quinn (Yamaha), Croker and Rhys Belling (Yamaha). For the round it was Halliday who stood in the centre of the podium and extended his championship lead to 41 points, with Spriggs second and Toparis ultimately salvaging third for the weekend.

YMI Superbike race two:
A nail-biting second Superbike battle was won by Herfoss in another commanding performance, pulling a 0.729s advantage at the conclusion of 16 laps. Race two once again featured Bayliss leading from the front, setting the pace over the opening 12 laps until the ever-patient Herfoss climbed from fourth into the lead by lap 13. He also registered a new lap record of 1m12.645s – the fastest-ever Superbike lap of Morgan Park – while making his charge toward the front. Second this time around was the resurgent Waters, comfortably ahead of Maxwell. Bayliss, like in Darwin’s second race, ran off the track in the latter stages, demoting him from second on track down to fourth and that’s where he would remain, still well ahead of Falzon in fifth. Staring improved to sixth this afternoon, beating home Walters, Turner, Collins and Ryan Yanko (Ducati). It was a disastrous round for Sissis in his first ride aboard the Honda, crashing out in the mid-stages. The round victory belonged to Herfoss ahead of Waters and Bayliss – that pair tied on points for today. In the championship Herfoss now leads by 44.5 points entering Winton’s penultimate round of the series between 7-9 September in Victoria.