A selection of racers weigh in on the cancellation of the British grand prix.

In a rare scenario, Sunday’s British grand prix was cancelled following lengthy delays due to unsafe weather conditions and poor circuit drainage at the Silverstone venue. While many have conceded it was the right call, the decision has drawn mixed opinions amongst riders. In this edition of The Point, we’ve compiled a list if racer comments from Sunday. 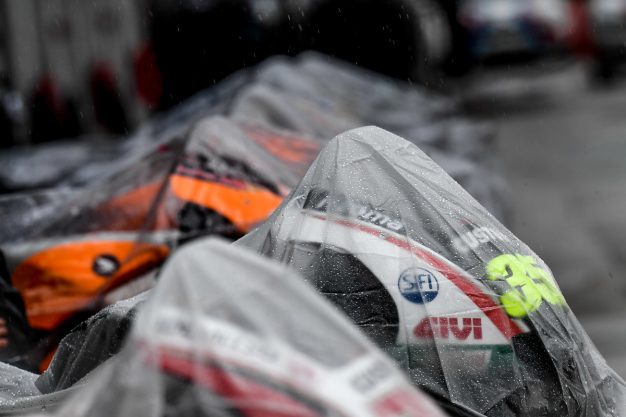 Marc Marquez (Repsol Honda):
It has been a long, unusual, tiring day that we hope won’t happen again. The Safety Commission analysed the situation and I think the Race Direction has to be thanked – they listened, and in the end, safety was everybody’s main consideration – one of us riders is in hospital already. During the day, I watched the screen and saw all the fans in the grandstands patiently waiting – it would have been good to reward them, but in the end, sometimes we must keep a cool head and think.

Andrea Dovizioso (Ducati Team):
It was a real pity not to be able to do the race because we were very competitive, especially in the dry. A weekend that was going well for us turned into an unacceptable situation, and so now it will be necessary to understand exactly what happened. We’ll talk about it in the Safety Commission at the next race, because to resurface a track and then find out it has more bumps than before, together with a problem of drainage, is just not good enough for a championship of this level.

Jorge Lorenzo (Ducati Team):
Yesterday’s weather forecast turned out to be right and it rained all day today. We only managed to do the warm up in dry conditions and then it didn’t stop raining and the track was in a bad condition. This confirmed that the asphalt wasn’t draining well and as time went by the situation didn’t improve. When it was late, the riders met with the Race Direction and we decided to cancel the race because the track didn’t offer the right conditions to race in safety.

Jack Miller (Pramac Racing):
[I’ve] been thinking about yesterday – I think you fans deserved more from us to say the least – people who traveled from all parts of the globe and fans at home in Australia who stayed up well past their bed times! And to the hearty British fans sitting in those freezing stands all day for us not to race, to say I am sorry would not be enough. The resurfacing job just wasn’t up to scratch and I still feel we need to do more to prevent this ever happening in the future. I would just really like to thank all the fans that were on the track for taking the decision they way they did, I would understand if it went the other way. 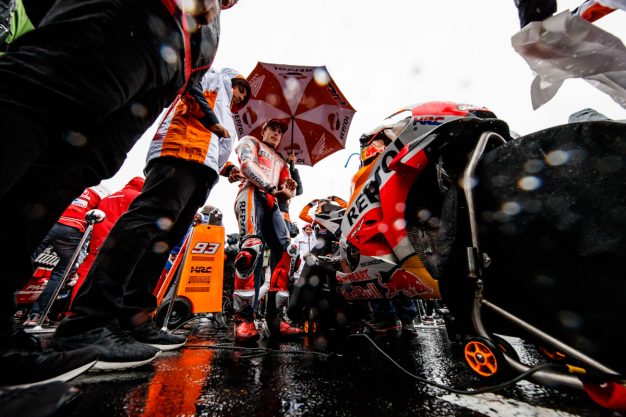 Cal Crutchlow (LCR Honda):
I’m devastated not to be able to race at my home grand prix, it was very disappointing that today went how it did with regards to the weather situation. The safety commission decided that we delayed and delayed all day and then decided finally that the track condition was not safe to ride due to standing water on the asphalt. But it was a very, very sad day for the fans and I’m truly sorry for them having come out in force to support me and all the MotoGP racers. We’re just sorry we couldn’t put on a show, as always I would have tried my best and I will try my best in the next grand prix also.

Johann Zarco (Tech 3 Yamaha):
The race was canceled after we were waiting a long time today hoping that the rain stops and we have less water on the track. We usually can race when it’s raining and although it was raining all day today, the rain was not very heavy. But with the new asphalt apparently, they did a mistake and it was so slippery with the bumps and there was aquaplaning. The crash on Saturday has been very strange and we could feel that almost every rider was already on the limit on the sighting lap. We took the decision we can not race because there was still too much water. It’s a pity we can’t go out there because we all were ready. But in the end, it’s safer to take this decision.

Alex Rins (Team Suzuki Ecstar):
Unfortunately we couldn’t race in the end. The weekend was pretty difficult because of the rain and the asphalt conditions and finally the safety commission decide not to race for safety reasons. I had a crash on Saturday and I realised how critical it was to ride in wet conditions here in Silverstone this weekend. I feel very very sorry for all the fans that came here and had to bear the cold temperatures, wind and rain, they were hoping to see us and they were disappointed.