Racer comments from Victoria's sixth round of the year.

A selection of riders detail their day at Winton’s sixth round of the 2018 Yamaha Motor Finance Australian Superbike Championship (ASBK) presented by Motul Pirelli. Team and privateer competitors can submit comments to [email protected] by Monday afternoon following events for inclusion in the post-event Quotebook feature. 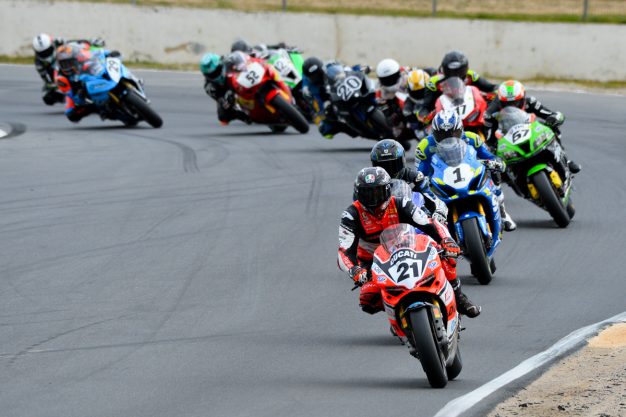 Troy Bayliss (DesmoSport Ducati) – Third overall:
It was a good weekend. I thought we were in for a bit better of a round, but beggars can’t be choosers! Third overall is a good place, but everyone was struggling with the tyre in some way and we had to go the distance. We just have to keep on working, making steps forward. I’m a bit closer to Wayne [Maxwell] for second in the championship and I’m really looking forward to heading to Phillip Island. It’s going to be good and I’m pumped to go back there next month!

Troy Herfoss (Penrite Honda Racing) – First overall:
It’s an incredible result and I’m just so thankful for everyone who has helped out this year. Deon [Coote] has taken over the team this season and has done a great job with the crew. It’s quite a small team and everyone has worked so hard – it feels good to really dominate it. There’s no questioning it, we’ve got the number one plate with a round to go and we really earned it. This tops all the championships I’ve won, just because we’ve won so many races – we’re at eight wins and I never dreamt that I would have that many in one year. This is the top of the pile for me and five overall victories is the icing on the cake.

Bryan Staring (Kawasaki BCperformance) – 12th overall:
I’m pretty disappointed really. It was an underwhelming and unsatisfying Sunday for us and it wasn’t through a lack of trying. I felt I got shot out of the sky in the first one – I was a bit unlucky there and had no option but to put the bike on the ground. In race two with all the restarts, it was anyone’s race. In the end we were fourth, which is pretty good on paper. I’m mostly disappointed because I don’t feel today was real racing – I don’t think I turned a lap in anger today because of the stoppages. We put our best foot forward, but that’s how it goes.

Kyle Buckley (Kawasaki BCperformance) – Seventh overall:
It was a good day, although I wasn’t very happy with the first race. I got caught up in the turn one incident and had grass all over my tyres – the first few laps were pretty much useless to me and I lost a lot of time. I managed to get back to P10, but I really felt I could’ve gone a lot better. In race two, I think a lot of restarts actually helped us because the Dunlop tyre worked really well at the end of the race – I’m really happy with P8 at the end of that race and to take seventh overall. I’m just hoping I can do the same thing at Phillip Island!

Matt Walters (Swann Insurance Kawasaki) – 16th overall:
The first race was actually pretty good for us. We made some changes and actually went quicker on the race tyre than in qualifying, which is not unusual for me, but a really good feeling to make that progression with the bike. I was happy to take eighth and take some points back in the privateer championship. It all fell apart in the second race though. I don’t think the crash was any fault of our own, we’re not sure what the issue is, but we will investigate and try to put our finger on what happened. It was disappointing because I was putting up a real challenge and trying to move up another place in the points… we did move up one anyway. We’ll repair the bike and go to Phillip Island now. The plan is to try and build a really good motorbike to finish the season strongly. The goal for us is to wrap up the privateer championship, which would be a great result for Swann Insurance Kawasaki. We have the bike at a place now where we can take it to any race track and it works well pretty much straight away. We’ve constantly been inside the top 10 and Phillip Island is a track that always suits the ZX-10R, so it should be a strong finish for us.

Mitch Levy (Yamaha) – 10th overall:
While we couldn’t quite crack into the top 10, last weekend was a really positive run for us overall, which is in no small part due to all of the hard work and support put in by the whole team and each of our valued sponsors. This year has been quite challenging for us at times, but last weekend’s round proves that we’re on the right track towards chasing consistently competitive results. Our results definitely give us some added confidence heading into the final round at Phillip Island next month and put us in good stead to finish the year on a positive note.

Wayne Maxwell (Yamaha Racing Team) – Sixth overall:
It’s good to bounce back in race two and claim a healthy victory and give the guys at Yamaha some reward for all their hard work they have done. The year might be done in terms of winning the championship, but now we have to focus on fighting for second place in the championship. The team and I will do everything we can to finish second in the championship.

Daniel Falzon (Yamaha Racing Team) – Fourth overall:
I’m happy to maintain our consistent performance and finish fourth for the round. It was far from the prefect weekend for me and I had issues in each race, but I kept on fighting and just as important, kept the bike on two wheels and that gives me a shot at the championship podium at the final round. Phillip Island has always been a special place. We had quite a good result there at the start of the year and were quite competitive, which is the main thing. I’m looking forward to heading back down to the Island and will be doing everything in my power to try and finish on the podium for the series. 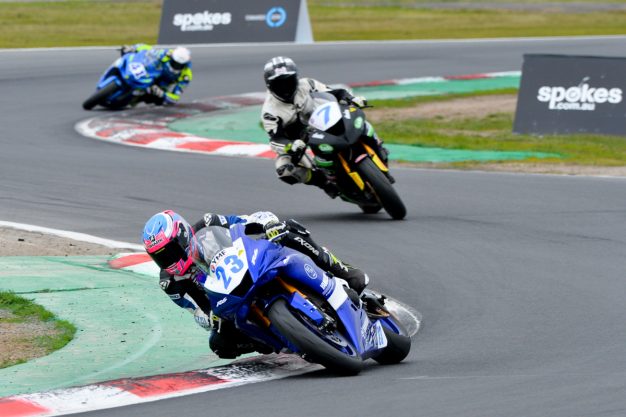 Tom Toparis (Cube Racing) – Third overall:
It was probably one of the toughest weekends that I’ve had in racing, with a number of crashes between the test and round. We started to run out of spare parts in the end, but anyway, in race one I accidentally made a mistake into turn one and ruined the race for myself and Cru as well unfortunately. Race two was a lot better, I just tried my best even though I couldn’t quite stop it under brakes. It’s been a good season, we still have a round to go and I’m happy with everything that I’ve learned so far. It’s also good to wrap up second in the standings as well, the standard has been set high this season and I’m satisfied with that.

Cru Halliday (Yamaha Racing Team) – First overall :
I knew I could get passed Tom, but then I also knew if he kept his head he would be able to hang with me. Tom pushed me all the way to the end. I’m not going to lie, I was riding at my hardest in the whole race. I rode the safest I possibly could, without going too slow. When I came around the last turn and onto the main straight and saw that championship winning pit board, it was just a massive relief. To be able to win this championship, aboard the all new Yamaha YZF-R6 for Yamaha Racing Team, Yamaha Motor Australia and all of our team sponsors is just an incredible achievement and something I’m very, very proud of. This title is the most rewarding for me as we have had the correct equipment to get the job done and everything has happened according to plan. The whole deal came together late but everyone put their heads down and worked hard and its pleasing to get the result we all wanted. To wrap up the championship with one round to go is a massive relief for myself as well as the final round at Phillip Island is not a track which I desire. Overall, it’s just great as YRT have not had a championship win in the Supersport Championship since 2011 and I’m just glad they have got back up there now and on the new 2018 R6. Hopefully the team can continue this form and win many more championships in this class in the future. I have to say a massive thanks to everyone from John Redding, Kev Marshall, Jeff Dillon and of course all of my crew who have worked alongside me this year. It’s just very rewarding and a great way to repay back the team and sponsors with all their hard work.