Youthful talent on his breakthrough form in the closing half of ASBK.

The Stauffer name is familiar in the Yamaha Motor Finance Australian Superbike Championship (ASBK) paddock, but this year it hasn’t been about former Superbike champion Jamie, it’s about the rise of his son, Max. At just 14 years of age, Stauffer recently took out race wins in both his classes at Winton Motor Raceway in a dominant display.

It’s quite the rise for the young Yamaha rider, who heading into the 2018 season had goals of just competing with the lead group, not taking race wins. “My goals heading into the season were to run with the front group, and at Phillip Island I found I just didn’t quite have the speed.” 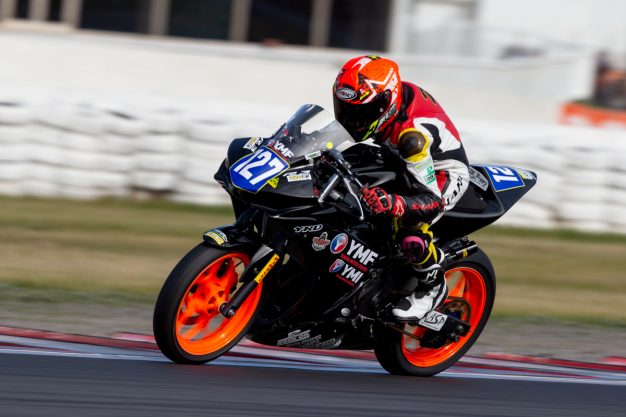 After his efforts of a ninth overall in the Supersport 300 class at Darwin, which included spending much of the 10 laps battling with the front group, Stauffer moved onto Morgan Park Raceway for round five where he experience his steepest learning curve.

“I just sat behind the lead group at Morgan Park and started to pick up on what the lead guys were doing. A big thing I noticed was the way they overtake – the guys are quite aggressive and not afraid to give you a little shove, and I just needed to see how they reacted to that. I was happy I learned pretty quickly what I needed to do going forward.”

Moving onto Winton Motor Raceway, Stauffer was a man on a mission, almost feeling like he came from the clouds to grab pole position in Australian Supersport 300 and YMF R3 Cup categories, dominating the weekend in the process. Stauffer grabbed two wins in Supersport 300 and then another two wins in the R3 cup. His rise to the front from the outside looked like it happened overnight, but that wasn’t the case.

“I’ll tell you now, it definitely didn’t happen quickly, well it certainly didn’t feel quick for me. After Morgan Park I had great confidence and as soon as we got to Winton, we got the bike set-up right and I felt comfortable. The confidence I gained from Morgan Park gave me the mindset to not just run at the front, but the confidence to go for the win, which I went on to do.” 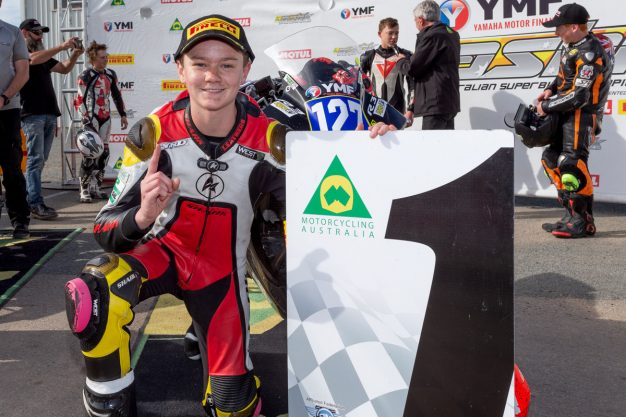 After picking up a few wins, Max was sure to pass on a bit of advice to his dad Jamie: “After the wins I did mention that I would pass on some advice to dad and hopefully it would stop him struggling – we tend to give each other a bit of stick in the pits.”

The final round of ASBK takes place next weekend at the famous Phillip Island Grand Prix Circuit and Stauffer can’t wait to get back on the bike and take on the long straight of Phillip Island.

“The track at Phillip Island is such a fast track and you need to be as aerodynamic as possible to keep your speed up – a highlight for me is heading into the first turn at roughly 200km/h is such an adrenaline rush. I think the front group will be really big, but I’m hoping to come away from Phillip Island with at least another win or a second.”

Stauffer holds down ninth in the Supersport 300 standings, while he’s ranked fifth in the R3 Cup championship ahead of Phillip Island’s finale.