Superbike and Supersport post-race updates from Victoria's final round. 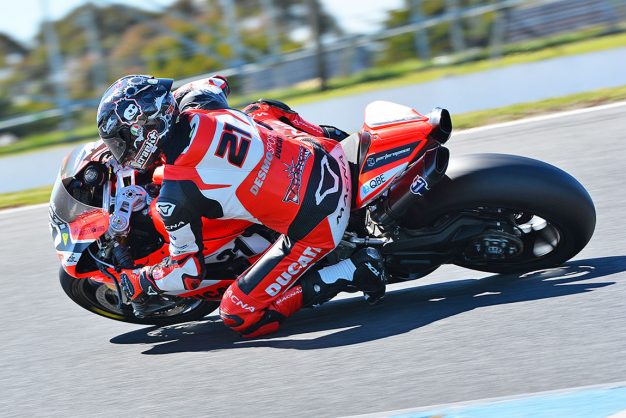 Kawasaki Supersport race one:
After capturing this year’s Kawasaki Supersport title at the penultimate round, Cru Halliday came out firing in the opening 10-lap encounter at Phillip Island to take victory in race one. But he didn’t have it all his own way after coming together with Max Croker (Suzuki) when the lights went out, pushing him well down the order and crossing the line in P18 on lap one. Up front it was Croker and Cube Racing’s Tom Toparis (Kawasaki) fighting for the lead, until an error from Croker took Toparis down entering turn four on lap seven. In turn, Halliday went to the front that same lap, going on to win by 0.701s from Callum Spriggs (Yamaha), Damon Rees (Honda), Scott Nicholson (Suzuki) and Zac Johnson (Yamaha). Positions six through 10 were filled by Jack Passfield (Yamaha), Nic Liminton (Yamaha), Croker, Giuseppe Scarcella (Kawasaki) and Broc Pearson (Yamaha).

YMI Superbike race one:
Team Suzuki Ecstar’s Josh Waters scored his first win of the 2018 season in a brilliant opening 12-lap YMI Superbike affair at Phillip Island, edging Wayne Maxwell (Yamaha Racing Team) and Troy Bayliss (DesmoSport Ducati) for victory. Each led their share of laps, however it was a gritty Bayliss who led across the line as the last lap board was displayed. Waters slipped through at turn four however and then Maxwell did into MG, which is how it would remain as the chequers waved – the trio split by just 0.634s. Fourth was solid for Glenn Allerton (Next Gen Motorsports BMW) on return, narrowly ahead of Daniel Falzon (Yamaha Racing Team), while dominant champion Troy Herfoss (Penrite Honda Racing) was an uncharacteristic sixth, followed by Ted Collins (Next Gen Motorsports BMW), Arthur Sissis (SA Demolition Honda), Matt Walters (Swann Insurance Kawasaki) and Mitch Levy (ATR Yamaha). Problems put Bryan Staring (Kawasaki BCperformance) out of contention in the race early to eventually take 29th, plus Mark Chiodo (Team Suzuki Ecstar) crashed out four laps in.

Kawasaki Supersport race two:
A dramatic climax to the season saw Halliday crash out of the lead on lap three while attempting to stretch a lead on the field, allowing Toparis to bounce back with the second race win by 3.720s ahead of Croker – who was penalised two places on the grid following his race one incident with Toparis – and Rees. Third for Rees was enough for him to clinch a breakout overall victory, however the second placing of Croker saw him seal third in the final standings behind Halliday and Toparis. Fifth was another inspired result for Nicholson, followed by Spriggs who just missed the overall, Scarcella, Pearson, Johnson and Ryan Taylor (Yamaha). Overall for the round it was Rees ahead of Spriggs and Croker, while in the championship Halliday had already been crowned at Winton, topping Toparis and rookie talent Croker to round out the season.

YMI Superbike race two:
Triple world champion Bayliss broke through for his first race win since Darwin in a thrilling second encounter, also delivering the overall victory in an incredible result at 49 years of age and out of retirement for season 2018. Race two saw Staring join the fray at the front alongside Bayliss, Maxwell and Waters, however the latter crashed out into MG on the final lap while leading. Bayliss took charge from that point and went on to win by 0.231s over Dunlop-shod Staring, with Maxwell also within a second in third position. Fourth came rookie Collins, followed by Walters, Sissis, Waters after he remounted, Glenn Scott (GSR Kawasaki), Levy and Mason Coote (Kawasaki) in a race of attrition. Non-finishers included the likes of Falzon, Allerton and Chiodo, each with bike problems forcing them out of the running. Overall for the round Bayliss was the victor from Maxwell and Waters, while in the championship Herfoss – who was 13th in race two after his footpeg came off – previously won, joined on the podium by Maxwell and Bayliss. Collins clinched the rookie honours with his fourth overall today, Walters was best of the independents and Yamaha edged Kawasaki in the manufacturer standings.