The 2018 Yamaha Motor Finance Australian Superbike Championship (ASBK) was highlighted by the comeback of triple Superbike world champion Troy Bayliss, making his mark to finish third in the standings despite retiring from his international career a full decade earlier. As team co-owner and lone rider at DesmoSport Ducati, 49-year-old Bayliss starred at Phillip Island’s final round with the overall victory via 3-1 finishes, also blasting to a 1m32.194s lap-time in race one and breaking the lap record that had stood for nine years in the process. CycleOnline.com.au tracked down Bayliss post-race to get his take on the season and what the future holds. 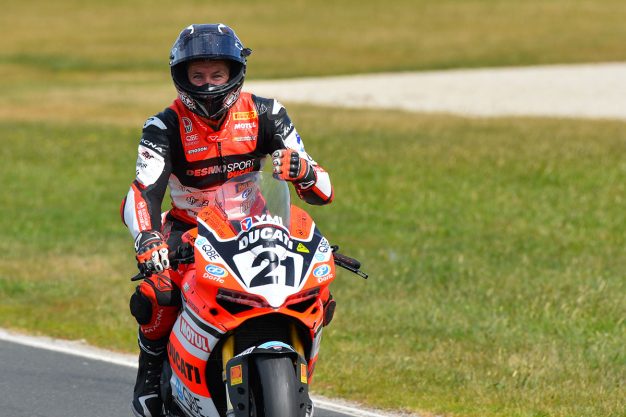 Congratulations on the result that you’ve been looking for and the team as well. Well done!

Yeah, thanks Alex. Honestly, today was the most fun I’ve had on the bike all year. We made some really good progress because we tried something after the warm-up that I thought wasn’t going to work, but we did it and it actually put us in the right direction. For the first race, I went over half a second faster than I did in qualifying and then we made the bike even better for race two. I’m so happy! It was good to be part of the game. After the warm-up I was a little bit down, so it’s always great when things turn around and it gives me motivation to stay on the bike.

Two really exciting races as well, which os always good. What was going through your mind out there?

They were! I was thinking as I was going around in both races that ‘this is a damn good race’ – especially the second one as there were four of us up there. That’s what people want to see and it could’ve been anyone’s. I had a bit of a misfortunate in the first race where I had a really good run onto the straight on the last lap, but I caught a guy and it didn’t quite work out for me. In the second race it didn’t quite work out for Josh [Waters]. I was second on the last lap, putting all of my eggs into the basket to get a really good run to the line to try slip him, but he covered his line a little bit too much and lost the front into MG, which was a shame. It was really good racing for everyone! I have to say thank to our DesmoSport Ducati crew and all the work they’ve put it in, it’s our last race of the year and our best result of the year!

How would you compare the feeling of when you first came back in February compared to now at the final round?

We made some really good steps today actually and we’ve gone so fast – we got the lap record in race one, which was good. We’ve had some really good results halfway through the year, but I think today we really struck something because it’s hard to figure this bike out. We can’t compare it to overseas because we use totally different electronics and everything like that, so it’s a lot of hard work. We are on our own, a lot of trial and error with a lot of hard work, but today we really stumbled across something. 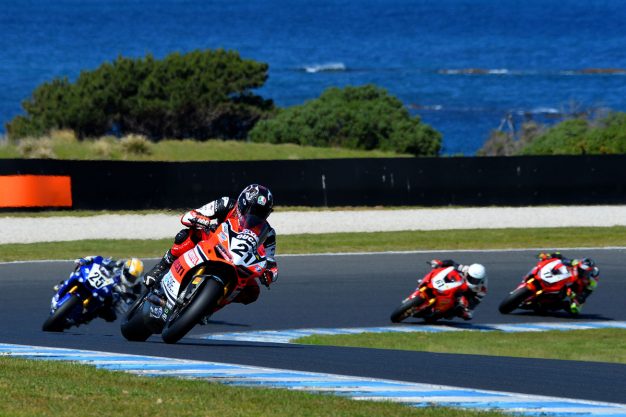 A podium in the championship for you too, finishing third in the points. That’s a nice bonus…

It is. Between Josh, Wayne [Maxwell] and myself it was up for second and, like I say, it could’ve went either way for all of us guys today and I ended up third. I’m happy enough with that mate, because today’s result made up for not finishing second and that’s great.

Just finally, in regards to next year, are you back again for 2019?

The plan is to be back again, yeah. And everyone asks about the V4… Honestly, the production doesn’t start until January for them bikes and Australia’s – we’re down under – always the last to get them. We will get them, but I’d say we won’t have them for the first two rounds. I don’t mind, I’m happy with the work that we’ve done on this bike because we’re competitive and that’s fine!