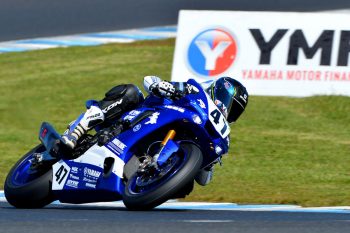 Yamaha Racing Team’s Wayne Maxwell has capped off the 2018 Yamaha Motor Finance Australian Superbike Championship (ASBK) with a second place finish at the final round of the championship at Phillip Island, and in turn, securing him second place in the final standings for the year.

Race one tuned into a three-way dog fight as Maxwell chased after race leader, Josh Waters, while Troy Bayliss closed in on the front duo as the race hit the half way stage. Maxwell was able to hit the lead not long after but ran wide on a turn allowing both to sneak by.

But, he quickly regained his composure, got back into the race and set off again after the leaders. On the twelfth and final lap, Maxwell pulled a couple of ‘Hail Mary’s’ that nearly saw him pinch the race win as charged back around Bayliss, then come up just .115 seconds short of Waters as they flashed across the finish line.

In race two, Maxwell again had good pace but just couldn’t find his way to the race lead as he finished the race in third after a spirited effort. Again, the gap between the leaders was under a second and the close racing proved exciting for those on hand.

With Maxwell scoring a 2-3 result, which handed him 39-points for the round, it saw him finishing second with Waters on a count back. More importantly, it consolidated Maxwell’s second place for the year in the championship fight, scoring 276-points for the year.

“Overall it was nice to finish the way we did with another top three. I’m happy with second place overall for the final round, considering the year which we have had. We have had a few DNF’s, so it’s nice to round the year out with a podium finish and reward the team and our sponsors this result.

“I have to say a massive thanks to the whole Yamaha Racing Team, as everyone has worked so hard this year to supply me a great motorcycle to go racing on,” Maxwell ends.

South Australia’s Daniel Falzon didn’t quite have the round that he was hoping for. After qualifying in sixth place, Falzon was confident he could make the most of his second row of the grid starting position.

After crossing the line in sixth place on the first lap, Falzon was soon up to fourth place by the lap two. From there, the former two times Australian Supersport and Supersport 600 champion was locked in a battle with Troy Herfoss, Glenn Allerton and Arthur Sissis. However, Falzon made a small mistake entering Lukey Heights mid-race due to missing a gear and lost a position to finish in fifth place at the end of the race.

It was an early exit for Falzon in race two, after he suffered a mechanical issue with his bike. Falzon got off to a really good start and felt strong as he was in fourth place and battling for a top three position. However, his bike lost power and for safety reasons Falzon had to pull off to the side of the track as I was becoming a bit of a “road block” due to not having a lot of power coming out of the bike. This ruined Falzon’s 100% finishing rate for the season. Nevertheless, Falzon, who ended thirteenth for the round, didn’t drop any positions in the championship.

“Fifth overall in the championship for our first year in the factory Yamaha team is not too bad. I want to thank John Redding, Kev Marshall, Jeff Dillon and my side of the garage for all the help and support they have given me this year. The team have always supplied me with a fantastic bike to go racing on, which is a huge credit to them,” finished Falzon.

For the newly crowned Australian Supersport Champion, Cru Halliday, his end to a fairy tale season didn’t quite to go plan. He managed to overcome his Phillip Island jinx by posting the fastest lap in qualifying and putting his Yamaha R-6 on pole position.

Halliday was able to convert his pole position into a race win in the first race. However, it wasn’t all smooth sailing for him. Halliday got a decent start, but Max Croker came in between Halliday and Tom Toparis and in the process ripping Halliday’s handle bars beneath him. This meant Halliday was forced to play catch up throughout the race, which saw him all the way back in twelfth position on the opening lap.

Halliday carved his way through the field like a hot knife through butter. By lap six he was up into third place. The following lap saw Croker and Toparis coming together, which handed the race win to Halliday, who beat follow Yamaha rider Callum Spriggs by .701 seconds.

Race two saw Halliday mis-time the start and find himself again deep in the pack, but in typical Halliday fashion, he didn’t panic and stayed kept cool, calm and collected as he mounted his charge back through the field.

As he closed in on the lead group, he lost grip on the rear and went down, causing his first DNF of the year but with the championship already secured, it was only his pride that took the hit.

“I’m glad the bike didn’t highside me and just slid out. It was a strange crash, as it happened late in the corner. Mistakes happen and I’m glad that it happened after we won the championship at the previous round,” expressed Halliday.

“Hats off to the team. The Yamaha YZF-R6 has worked unreal this weekend and throughout the whole year. It’s a shame the year ended with a crash. In saying that, we have been flawless all year. You are allowed one hiccup here and there. Other than that, it was a good round, of course not the result we were looking for. We have found pace around here, which we have never had before, which is a positive to take away from the round,” finished Halliday.

Yamaha Racing Team’s director John Redding expressed that after Maxwell’s qualifying result that the team were expecting him to be on top of the podium in both races.

“Wayne fought hard and came through and finished on the podium in both races, which enabled him to secure second place in the championship. For Wayne to finish second overall is a good thing for the team and Yamaha Motor Australia, and of course our team sponsors,” said Redding.

“Naturally we are disappointed with what happened to Daniel, as he had found some speed this weekend and was showing promise,” added Redding.
Redding also added that it wasn’t the best way for Halliday to finish the year off with a crash.

“Cru wanted to win every race, which is the nature of the beast with racers. You obviously have to push hard in races, but Cru unfortunately pushed a little bit too hard. Overall, we are very happy with Cru’s results this year. Obviously after round one, he pretty much dominated the championship, winning the title with a round to spare. You can’t ask for anything better than that, so congratulations to him and the team,” finished Redding.