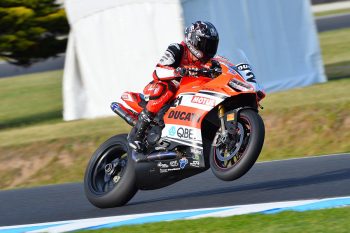 The three-time Superbike world champion stormed to P1 in the opening encounter on Friday, controlling all eight laps to secure a 0.268s victory. Due to delays, it was the only Superbike race hosted on the first day, reducing the schedule to just three races.

Ever-motivated 49-year-old Bayliss returned for a strong performance in a fierce second outing, trading the lead on a number of occasions before being forced to accept second position, a slender 0.017s shy of victory in wet conditions on Saturday morning.

The overall would come down to an intense battle in the third and final race of the grand prix weekend today, Bayliss once again securing runner-up honours following a tough fight only 0.327s from the lead, granting him the overall win to complete a fantastic 2018 campaign in his return year to racing.

“I’m really happy with the weekend,” Bayliss stated. “In the last two race meetings we’ve had overall wins, so it’s really satisfying. To do it at Phillip Island on grand prix weekend is just a massive bonus for everyone involved and our sponsors. It’s great to finish on a good note with everyone there. I’m really happy and really happy for Oli [Bayliss] to do the same thing in Supersport 300 as well!

“It’s been a weird weekend – our second race was early Saturday morning in the rain and we had difficult conditions. There were birds on the track and today we had a kangaroo, so that was strange! The mixed conditions made it hard to get into a groove and with just one race each day and no warm-up, it kept us on our toes, but we got it done and are obviously really happy.”

DesmoSport Ducati team co-owner and manager Ben Henry was thrilled with the result, highlighting Bayliss’ competitiveness aboard the Ducati 1299 Panigale R Final Edition in the mix of weather conditions that were delivered at the unpredictable Phillip Island venue.

“It was nice to finish the year with a win,” recalled Henry. “Everything was working good and it was an interesting weekend with the weather, although we were competitive in both conditions, so I’m really happy with that outcome. It’s good to get it done in front of all the supporters and it is definitely really, really satisfying.”

The Australian Motorcycle Grand Prix completes DesmoSport Ducati’s racing commitments for 2018 following seven rounds of the Australian Superbike Championship (ASBK), which saw Bayliss wind up third in the standings after sealing victory at the season finale earlier this month.