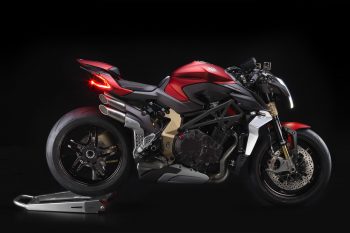 The Brutale 1000 Serie Oro has instantly become a desirable motorcycle for riders worldwide. With this model, MV Agusta has revolutionised a market segment, re-interpreting technical and stylistic concepts synonymous with MV Agusta and at the same time defining new aesthetic and performance parameters.

With 212hp of peak power and a top speed of over 300km/h, MV Agusta has brought the concept of hyper-naked to its extreme limit, making it the absolute benchmark within the category.

The all-new model has been closely associated with the F4 RC Superbike, which has proven its potential battling for the top positions in the Superbike World Championship.

All the experience that has been accumulated on the racetrack has been poured into the engine of the Brutale 1000 Serie Oro, which sets new records for absolute power while still complying with environment and noise regulations, making it more advanced in certain aspects than the competition powerplant. 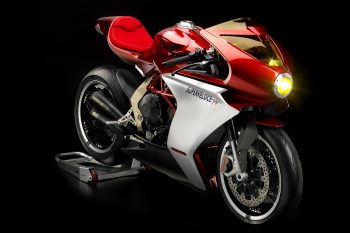 The MV Agusta Superveloce 800 makes its debut in concept form at the EICMA, a precursor to the model that will be produced in the second half of 2019. Due to its very unique technical and aesthetic characteristics, the Superveloce 800 is destined to become one of the most eclectic and original models in the company’s history.

The lines of the Superveloce 800 are a modern interpretation of the iconic lines formed by the MV Agusta heritage, the fusion of vintage and contemporary. The carbon fibre fairing envelopes the sleek and functional forms of the engine and frame like a second skin.

The upper fairing, with its classic cut lines, makes tribute to design ethos of the nineteen-seventies, highlighted by the yellow colour of the plexiglass windscreen and the headlight unit. The latter is a technologically advanced twin-function full LED poly- ellipsoidal. The daylight running light, also LED, is built into the cover of the new instrument cluster.

The elusive, lightweight and minimalistic tail fairing rests on a new sub-frame allowing the user to transform the bike from a single seat to a dual seat version. One of the defining details is the new circular LED tail light unit, elegant, and distinctive.

Australian pricing and availability of the Brutale 1000 Serie Oro is still to be determined, while the Superveloce 800 concept is set to go into production next year.