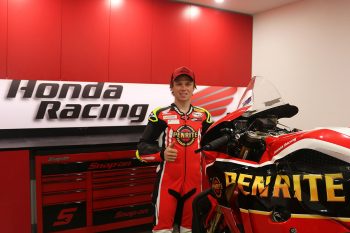 Chiodo, 20, impressed as a rookie this season as part of Team Suzuki Ecstar, rounding out the year with a best result of fourth overall at Phillip Island’s Australian Motorcycle Grand Prix support races.

To be joining the title-winning factory team of Honda Motorcycles Australia, operated by the Victorian-based ER Motorsport organisation, is a significant step in the young career of Chiodo.

“I’m really excited to be joining Penrite Honda Racing for my second year in the Superbike class,” explained Chiodo. “It will be a perfect platform for me to work from within a title-winning team and I know that the CBR1000RR SP is a truly competitive package.

“Hopefully this year I can consistently be within the top five and possibly battling for podiums. The ER Motorsport crew is really tight-knit and I’m happy to be working with the likes of Stewart Winton and Shaun Clarke for the season ahead. I’m really thankful for the opportunity provided by Deon and the team.”

“The Penrite Honda Racing team is now in a position to expand to two riders following a successful season with Troy and we’re looking forward to 2019,” Coote commented. “It’s always good to support a young talent like Mark, he will fit in well alongside Troy and I think our team environment will be a positive for his career.”