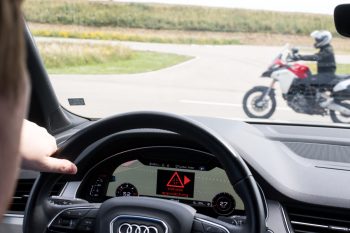 Ducati has completed its first US demonstration of a communication system that interlinks vehicles, street infrastructure and pedestrians, technology in which it has developed alongside Audi, Ford and Qualcomm Technologies.

As a part of the 2019 Consumer Electronic Show (CES), a Ducati Multistrada 1260 as well as Audi and Ford vehicles, demonstrated driving situations utilising C-V2X direct communications.

All vehicles were equipped with C-V2X technology featuring the Qualcomm 9150 C-V2X chipset to demonstrate a cooperative intersection use case, exhibiting how C-V2X can be used between vehicles to negotiate the right of way in entering a four-way, non-signalised intersection where intention sharing and non-line-of-sight (NLOS) conditions make the use of a wireless sensor such as C-V2X ideal.

The companies also exhibited additional Vehicle-to-Vehicle (V2V), Vehicle-to-Pedestrian (V2P) and Vehicle-to-Infrastructure (V2I) safety scenarios, demonstrating the maturity and potential of C-V2X technology. The V2V use case featured the Intersection Movement Assist (IMA) scenario, which is a key countermeasure to address angle collisions at intersections, while the V2P scenario exhibited how C-V2X can be used to protect vulnerable road users, including pedestrians and bicyclists.

The V2I use case featured the Work Zone Warning scenario, which is designed to provide drivers advanced warning of road construction ahead allowing them to manoeuvre in a safe manner.

This week’s Las Vegas demonstrations follow the successful showings of C-V2X trial validations and interoperability conducted throughout 2018 in Europe, Japan, Australia, China and the United States, as well as the first live C-V2X interoperability demonstration between a motorcycle, vehicles and roadside infrastructure, which was hosted by several leading automotive and technology companies, including Ducati and Qualcomm Technologies.

Ducati, Audi, and Ford are amongst several global automakers who have closely evaluated C-V2X technology for its reliability, high-performance capabilities and readiness through rigorous testing. Currently, C-V2X is the only V2X alternative that provides a clear evolution path to 5G, in a backward compatible manner, and is designed to deliver reliable and consistent performance in realistic driving scenarios.

While complementing other Advanced Driver Assistance System (ADAS) sensors, such as radar, lidar, and camera systems, C-V2X direct communications supports an ever-expanding set of safety use cases, as well as enhanced situational awareness by detecting and directly exchanging vital information.

Additionally, C-V2X is designed with a focus on security, benefitting from established security transport layers and application protocols defined by the automotive standards communities, including ISO, ETSI and IEEE 1609.

Because C-V2X can be easily integrated into all wireless modems to offer direct and network communications, its implementation is cost-effective, which is especially important as the automotive industry continues to move towards adding wireless connectivity in all vehicles.