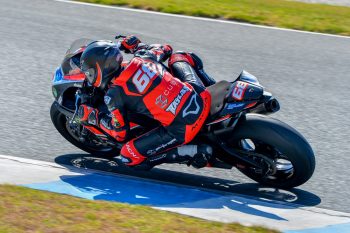 The Cube Racing rider, son of three-time superbike world champion Troy Bayliss, lodged the third fastest time in the category aboard a Yamaha YZF-R6, winding up just over two seconds off title favourite and pace-setter Tom Toparis (Yamaha), offering a boost of confidence to the Queenslander.

“It was great to get on the bike this weekend and put some laps in,” Bayliss explained. “Supersport is such a different style of racing to Supersport 300, but I’m loving it. I managed to be in the top group in all my sessions, so I’m feeling pretty confident that with some more time riding the bike, I can be competitive.”

Cube Racing team manager Ben Henry praised Bayliss for his efforts, commending him on his mature take to transitioning from the Supersport 300 division.

“It was a great weekend for Oli,” said Henry. “He used his head, riding to the conditions and learning as he circulated to put in some great times. I think he gained some confidence out there, and as he keeps improving his skills and feedback to the team, he’ll keep progressing through the season with some great results.”

Bayliss will make his Supersport racing debut on 21-24 February at Phillip Island for the opening round of ASBK, which will run in conjunction with the FIM Superbike World Championship opener.