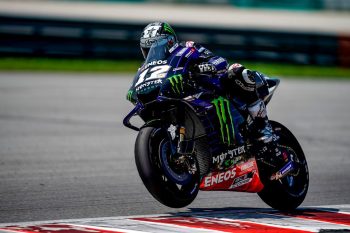 Maverick Vinales (Monster Energy Yamaha MotoGP) got within just 0.067s of Jorge Lorenzo’s fastest ever lap of Sepang on day two of MotoGP testing, with the 1m58.830s set by Lorenzo last season – although not an official lap record – now surely under threat on day three.

Vinales had been hovering in third for much of the latter part of the day and left his vie at record breaking late as the final few minutes saw time attacks light up the timesheets.

More than three tenths up before the final sector, the Spaniard eventually crossed the line 0.527s ahead of nearest rival Alex Rins (Team Suzuki Ecstar), setting both a supreme lap and a serious benchmark.

That built on a positive first day on the timesheets for Monster Energy Yamaha MotoGP and Valentino Rossi in sixth added to the good vibes. The veteran Italian did 51 laps and was only two tenths off second, although the distance to his teammate stretched out from there.

The Iwata marque confirmed they have a busy agenda, with different winglets and chassis items on the menu. Happy with progress since November, Team Director Massimo Meregalli says the biggest focus from Sepang is the last part of the corner and specifically, acceleration.

Petronas Yamaha SRT’s Fabio Quartararo and Franco Morbidelli ended the day in P14 and P15 respectively – and the Frenchman had a 2019 bike as he made that key step forward. They both did 58 laps.

Alex Rins was the man who lost his top spot to Vinales after seeming set to end the day fastest, but the Spaniard’s 1m59.424s was nevertheless an incredible lap-time and he did 61 laps on Thursday. Team Manager Davide Brivio said it’s going well and they have different swingarms, new aerodynamics with both riders and some different combinations.

The Italian said their focus is fitting together the ‘puzzle’ correctly for the first race, and the timesheets seem to bode well for Rins despite the Hamamatsu factory losing their concessions in 2019. Rookie teammate Joan Mir ended the day in P21 after 64 laps.

On Rins’ tail was the fastest Ducati on day two and once again it was an Independent Team rider – this time Jack Miller (Pramac Racing). The Australian was a late mover like those above him and was only a tenth off Rins by the end of play, putting in 49 laps.

Just behind him came Andrea Dovizioso, who was the fastest Mission Winnow Ducati and looked set to top the day’s action until the late flurry of fast laps saw him pushed down to fourth. Initially the number 04 was working on frames, and team manager Davide Tardozzi confirmed that teammate Danilo Petrucci was focused on finding a better connection between the throttle and the rear tyre – working on the electronics and engine.

Roles were then reversed, and Tardozzi also confirmed the Borgo Panigale factory also had some work on aero planned. That’s expected tomorrow. Today, it was two red machines in tandem as the two were on track together on some longer runs in the afternoon, with Petrucci saying he has ‘more to learn’ than his teammate and ending the day in ninth.

Tito Rabat (Reale Avintia Racing) pipped him on his GP18 to end Thursday in P7, with Francesco Bagnaia fastest rookie in P12 for Alma Pramac Racing. Cal Crutchlow (LCR Honda Castrol) put in a good showing on Thursday to take fifth overall and end the day as fastest Honda. The Brit is returning from a badly broken ankle sustained at Phillip Island last season but managed 53 laps to end the session within just 0.004s of Dovizioso. He also suffered a crash.

Next up for Honda was eighth placed Marc Marquez (Repsol Honda Team), who downed tools early once again and put in 37 laps on day two – although some of those were a longer run in the afternoon. The team confirmed they’re on schedule despite the lighter lap load for the reigning champion, too – with Marquez routinely having done over 90 laps per test day last season – and were working on the new bike, new engine and electronics, with a lot to get through including some different fairings.

He said he outstripped his expected progress for the day and it made him smile to dip below the two minute mark for the first time, and he ended the day in P11 after 58 laps. Teammate Pol Espargaro was P17 and just over three tenths off the Frenchman. KTM test rider Mika Kallio was a couple of places back, and just pipped Red Bull KTM Tech 3 rookie Miguel Oliveira. Malaysian Hafizh Syahrin had a tougher day, outside the top 20.

Aprilia Racing Team Gresini, meanwhile, had a race simulation fairly early on day two for Aleix Espargaro as Andrea Iannone remained focused on adaptation. Bike balance, electronics and torque control were a focus for the Noale factory. Espargaro ended the day in P13 after 54 laps, Iannone in P18 after 39. Romano Albesiano, Technical Manager, also confirmed that it’s not just the immediate future the marque are working towards, with plans made to make some big changes in testing in order to set up some more radical development later in the season. 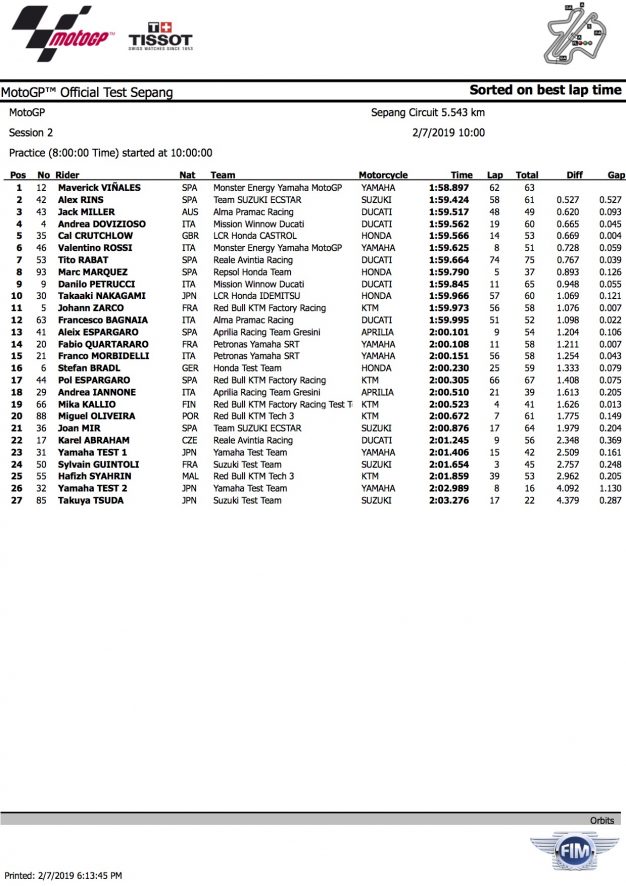