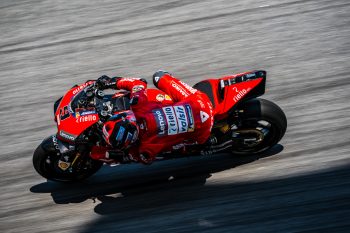 Despite a setback during proceedings, the Italian ace believes many positives were extracted from the second day of three in the official test, even though he didn’t lap a time in the lead group of the classification.

“It’s been a very intense day from a physical standpoint, because we clocked a lot of laps and we even rode over the race distance in two consecutive runs during the hottest hours,” Petrucci commented. “I have to say we gathered a positive feedback, both from a technical and physical standpoint, and the team did an excellent job.

“A small setback prevented us from further improving our lap times, but the rankings are certainly not our priority at this point of the year. Compared with yesterday, we’ve been a lot more competitive with higher temperatures, which makes me really confident ahead of tomorrow.”

The second day of testing was mastered by Maverick Vinales (Monster Energy Yamaha MotoGP), who was half a second fast than Alex Rins (Team Suzuki Ecstar) and Australian Jack Miller (Pramac Racing).