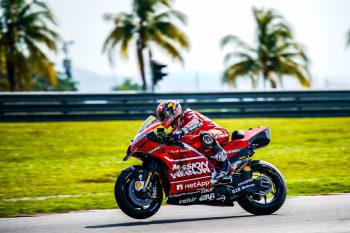 Andrea Dovizioso believes the strong presence of Ducati riders at the top of the timesheets on day three of testing at Sepang International Circuit in Malaysia is confirmation of a solid platform provided by the Italian manufacturer.

The Mission Winnow Ducati contender sampled a new fairing in the final outing that has drawn a positive review, although he admits it’s still too early to come to a conclusion on his final set-up.

“All in all, this test has been positive,” Dovizioso declared. “It was important to push to the limit again today because we only have another test before the season starts, and we managed to post a competitive time even on a flying lap after being really consistent in yesterday’s race simulation.

“Also, to see so many Ducati bikes at the front confirms that we have a good base. We also tried a new fairing, with positive feedback. It’s still early to draw conclusions, but I’m happy with the work done here and now we’ll look for more ways to improve ahead of Qatar.”

The MotoGP World Championship returns to testing at Losail International Circuit in Qatar on 23 February, while the season kicks off at the venue on 10 March.