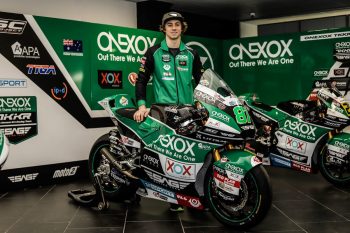 The ONEXOX TKKR SAG Racing Team Moto2 machine that Remy Gardner will pilot in the 2019 world championship has been uncovered during a team presentation.

The Australian, who transferred to the squad from Tech 3 Racing, signed a two-year agreement with the outfit last October, cementing is future in the intermediate category.

Gardner is coming off one of the best campaigns of his career, where he earned his maiden front row start – which he was later denied of due to Silverstone’s cancellation – while also recording a career-best result of fifth at Valencia’s finale.

Son of former motorcycle grand prix world champion Wayne Gardner, the youthful talent will hit the track for the first time in his new colours on 1 March at Losail International Circuit in Qatar for Moto2 testing, the same venue that will host the season-opener on 10 March.

This year marks a new era in the Moto2 World Championship as the division transitions from Honda to Triumph-powered engines, which is set to introduce a faster pace to the class.