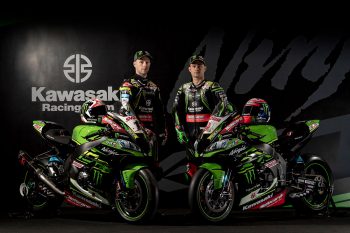 The new-look Kawasaki Racing Team unveiled its 2019 Motul Superbike World Championship contender in San Remo, Victoria, on Saturday night ahead of next week’s opening round of the season.

In launching its final line-up and livery in Australia this year, rather than at their home base in Barcelona as in previous seasons, KRT has already put a fresh spin on its approach as the excitement builds towards another new season at the highest level of production-derived racing.

Managing director of Kawasaki Motors Australia, Shigemi Tanaka, led the speakers on the night as the latest product of KHI’s passion for racing was unveiled to a waiting world, both on site and to the world through live streaming online.

“It is indeed an honour to have the unveiling of the 2019 Kawasaki Racing Team here at Phillip Island and for Kawasaki Motors Australia to be hosting this important event,” Tanaka commented. “Three times in the past it has been my pleasure to speak at these launch events on behalf of both Kawasaki Motors Europe and Kawasaki Heavy industries.

“Now with Jonathan Rea as a four-time world champion on the Ninja ZX-10RR it is a nice coincidence that this is now my fourth time to speak, this time on behalf of Kawasaki Motors Australia and Kawasaki Heavy Industries. The theme today is Ganbarou – we will face our challenges and try harder.”

With winter testing ended in Europe at the end of January, there will now be two days of official tests for all WorldSBK competitors at Phillip Island on Monday and Tuesday. With a new format to race weekend in 2019, featuring three WorldSBK races and not two, the first round of the new season will be truly historic.

“KRT always push the boat out when it comes to launching the new colours and it is the first time you see your final bike in the flesh,” Rea explained. “Everything is real and now we turn the page to 2019. Alpinestars have done a great job with my leathers as well. I changed my number one plate a little bit too, incorporating some new logos. It is nice to do the launch here in Australia and so close to the first race weekend.”

Haslam added: “To be part of such a professional team and to see the manufacturer itself and Kawasaki Australia putting on such a massive show is fantastic – they are really getting behind it. I just want to get going now. The launch and all the things around it are exciting but now I just want to get on track to ride the new bike.”

“Last year we faced the challenge of new technical rules that we feel constrained our performances,” Roda stated. “Nevertheless, we succeeded in winning the riders, manufacturers and teams world titles in a very successful year. For this year these rules are still maintained, but we’re prepared.

“We have a bike with a new more capable engine and we have reinforced our technical and human assets to take advantage of this. We also welcome a new rider in Leon Haslam, who has been making big steps in the winter tests. We think makes a great pairing with Jonathan Rea, who has offered us so much in all terms.”