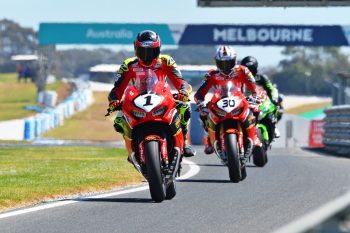 An expanded Penrite Honda Racing team will commence its title defence in the 2019 Australian Superbike Championship (ASBK) this weekend at Phillip Island, Victoria, with number one plate-holder Troy Herfoss and team newcomer Mark Chiodo set for the season ahead.

Herfoss will take on double-duties this weekend as the 32-year-old Gold Coast resident will also compete as a wildcard in the opening round of the Superbike World Championship (WorldSBK), due to line-up in no less than six races across the weekend.

Following a spectacular run to the ASBK crown last year in which he won five of the seven rounds, Herfoss and his Penrite Honda Racing CBR1000RR SP Fireblade enter the new year as pre-season title favourites on paper. Regardless, there has been no stone left unturned as Honda Motorcycles Australia’s factory organisation aims to progress further for 2019.

“Everything has gone really well in the pre-season, using the approach that has worked in the past and we’ve ticked all boxes in testing,” Herfoss explained. “We weren’t the fastest in the official Phillip Island test on paper, but I’m happy with where we’re at. My outright speed was better than usual for February and I was on race tyres, so I’m satisfied and ready to go.”

It’s the second year in a row that Herfoss has taken on the challenge of riding both ASBK and WorldSBK on the same weekend, however this time around he and the ER Motorsport-operated squad are well-prepared. Testing earlier this week enabled the team to shakedown their heavily-modified WorldSBK contender, now hopeful of climbing the order when official practice begins on Friday.

“I was disappointed with how the WorldSBK test went, but in saying that we had to go through a lot of processes and we learned a fair amount as a team,” he added. “We started with little information on what is a World Superbike, but the potential is far greater. You always want to be faster, but it takes time and I hope to be there as the weekend goes on.”

For Chiodo, arriving at the title-winning Penrite Honda Racing team for 2019 is a remarkable opportunity that will serve as a major boost in his young career. With a full season in the premier class to his credit and after experiencing a positive pre-season, the 20-year-old Victorian has set himself a number of goals to reach during the year.

“Testing has been good and I’ve managed to do a fair few days on the Honda now,” Chiodo commented. “Using that experience I’m hoping we can have three good, strong races. I really want to pick up where I left off last year, put in consistent rides and work my way towards the front of the field. I’ve been enjoying my time with Penrite Honda Racing and can’t wait for round one now.”

Penrite Honda Racing team manager Shaun Clarke is excited for the opening round to get underway this weekend at Phillip Island, taking a methodical approach into the season and targeting a winning start to the ASBK series. A shining performance for Herfoss in WorldSBK is also on the cards, although the domestic team is aware of the significant challenge ahead.

“We’ve changed quite a lot of things during the off-season and continue to develop the ASBK package that we have,” Clarke stated. “It’s work in progress at this stage of the year, but we’re quite confident that we’re ready for Phillip Island and will be very competitive. Race distance is important and that’s what we’ve been focusing on in the lead-up.

“To have Troy defend the championship will be really good, we’re excited for that, and also welcome Mark into the Penrite Honda Racing team. Together I believe they will deliver strong results and we will be able to help Mark make progress as he learns how to get the most out of a Superbike with the team.

“This weekend we will also be in WorldSBK, using what is very much a world championship specification motorcycle, and with that comes an added challenge since it is so far removed from the ASBK bike that Troy usually rides. We had the shakedown earlier this week, so now we have tried to piece the puzzle together using that information and if we do that he should be pretty competitive.”

Opening practice for the ASBK championship will begin on Thursday at 3:00pm, with additional practice, qualifying and a trio of 12-lap races to be contested through the round. Herfoss’ WorldSBK duties will include official practice from Friday, followed by qualifying and three world championship races over the course of the weekend.