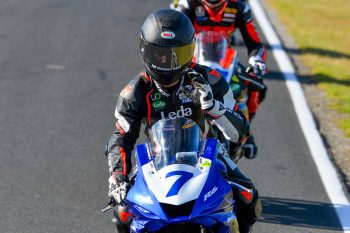 Coming off a stellar weekend at Phillip Island in both the Supersport category of the Motul Pirelli Australian Superbike Championship (ASBK) and FIM Supersport World Championship (WorldSSP), it’s been revealed Tom Toparis has scored a deal with Benro Racing to contest the 2019 IDM Supersport 600 Championship in Germany.

The youthful talent dominated in the domestic series at the weekend, claiming pole position before sweeping all three races, while in his WorldSSP wildcard appearance, he raced to an impressive 11th place result.

It’s understood Toparis will continue to challenge the ASBK with Landbridge Transport Yamaha alongside the German championship, where he’ll also pilot a YZF-R6.

“I am very happy that I can announce I will ride in the 2019 IDM Supersport class on a Yamaha YZF-R6 with Benro Racing,” said Toparis. “I am very grateful for this opportunity. It will be a busy year, because I’m going to combine the Australian and IDM championship.

“My family and I focus completely on racing and my goal is also to win this year in Australia. I have no particular goals for the IDM, because I don’t know what I can expect. I will make every effort to get to know the circuits and motorcycle as soon as possible, and I also I’m going to enjoy life on the other side of the world.”

Toparis will make his first appearance with the Dutch squad at round one of the IDM series on 17-19 May at the Lausitzring circuit. Round two of the ASBK is scheduled for 22-24 March at Wakefield Park in New South Wales.