Miller and Bagnaia pull the covers off their current Ducati contenders. 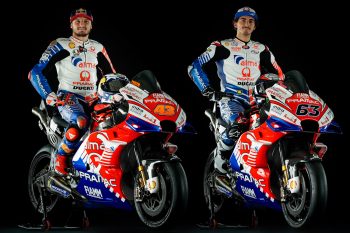 Pramac Racing has uncovered its fresh look for the 2019 MotoGP World Championship designed by the Centro Stile Lamborghini, launched in a live broadcast from Milan, Italy.

Fielding Australian fan-favourite Jack Miller and MotoGP rookie Francesco Bagnaia, the team enters its 18th consecutive season of being on the grid in the prestigious series.

Miller, embarking on his second campaign with the outfit, will pilot the latest Ducati Desmosedici GP19 this year, recently completing a positive test at Qatar.

“This is a very important season for me,” Miller declared. “I have the official version of the Ducati Desmosedici GP at my disposal and I have to show that I can be competitive fighting with the leading group.

“I will also be able to count on the support of my team with whom we have built a wonderful relationship over the past season. Now it’s time to make a qualitative leap forward in terms of results.”

Bagnaia added: “I’m thrilled to be starting this new adventure with a team that from day one has been very present, very attentive and with great ambitions – these are very important factors for me.

“We did well during tests and lap after lap the feeling with the bike has improved. The first grand prix, however, is already just around the corner and I can’t wait to get on track in Qatar.”

The opening round of the 2019 MotoGP World Championship is scheduled for 10 March at Losail International Circuit in Qatar.