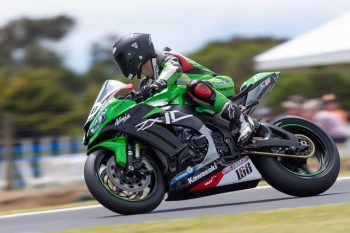 Over 37 entries for the Superbike class attended, among them were 9 Factory riders and many top privateer runners. It is by far the greatest and most competitive field seen in ASBK history.

Team GSR Kawasaki had a stressful week leading up to the round, with the build of their 2019 ZX10R coming together at the eleventh hour.

“The start of every race season is always a little stressful, it wouldn’t be motorcycle racing if it wasn’t. It’s always tricky starting a race meeting on a brand new bike also. Unfortunately, we struck some bad luck in FP1 where we were haunted by an electrical gremlin for the 30min session. We lost valuable track time however the team worked hard to fix the problem for the 15min FP2.

After only having a 15min practice session on my new 2019 ZX10R, the 10min qualifying session to follow was one hell of a task for myself and the team as we were still chasing a set up I was comfortable with. We did our best but, with the unbelievably stacked field this year, 19th was the best we could produce in the 10min session with a 1.35.5 lap time”.

Glenn and the team worked hard to come up with a setting that would boost their confidence and get the results they were after for the three race format. Boosting their confidence is exactly what they did as Glenn went on to improve a minimum of 6 places and lowered his lap time in every race.

“I am really happy with our 3 races. To move through the field like we did each race was really satisfying. In race 1 we moved up 6 places to finish 13th. The 12 lap race was vital for the team as we managed to gain a lot of data from the race and improved the set-up of the bike for race 2, where we moved forward 10 places to finish 9th and snagged our first top 10 finish of the season. Race 3 was another cracker, we didn’t reach the top 10 again however, our 13th place finish was extremely rewarding as our lap time was lowered into the 33’s and we took the top speed for the weekend with a staggering 311 km/h”.

“I want to thank my amazing team, Al Samuels, Mick Muldoon, Ryan Hughes and Rob Harding for their hard work all weekend. We started the weekend with a few troubles, however we worked through them and finished the weekend off strong which was truly satisfying, showing we have the potential to move our way up the field in rounds to come”.

Glenn now sits a very close 12th overall in the championship leading into Round 2.