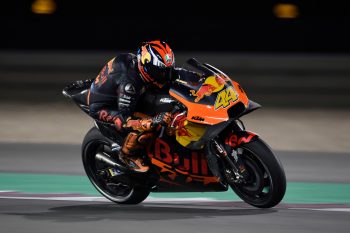 Red Bull KTM Factory Racing’s Pol Espargaro believes adapting quickly to the changing conditions of Qatar’s night schedule will be key to the opening round of the 2019 MotoGP World Championship at Losail International Circuit.

Describing the venue as strange, the Spaniard explained the changing temperatures and humidity can offer up a mixed feeling on the circuit from start to finish of the race, emphasising to need to adjust to the conditions.

Espargaro completed the recent MotoGP test at Losail in a positive manner, finishing an impressive seventh on the timesheets – half a second off pace-setter Maverick Vinales (Monster Energy Yamaha MotoGP).

“Losail is a strange track and pretty different to all the others, mainly because it is the first grand prix and everyone wants to start the season well,” Espargaro commented.

“There is a lot of pressure. Racing in the night means the temperatures are usually quite low and the humidity is high, from one hour to the other or from the start of the race until the end the track can change a lot so you have to adapt fast. We’ll look to do our best and get the race set-up fixed as quickly as we can.”

The MotoGP World Championship will kick off this weekend, with the initial practice sessions taking place on Friday, followed by qualifying and racing on Saturday and Sunday respectively.