Italian confident in set-up for this weekend's opener. 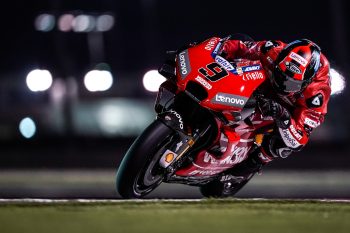 Mission Winnow Ducati Team newcomer Danilo Petrucci says he’s been optimising his mental and physical approach ahead of this weekend’s MotoGP World Championship opener in Qatar, endeavouring to maximise his opportunity with the factory team.

Petrucci has made a number of changes to his program since being promoted from Pramac Racing to benefit his campaign for a maiden title, priming him for the 19-stop series.

The Italian ace, who acknowledged the highly-competitive field in 2019, is confident the results from testing with his Desmosedici GP19 will offer him a chance at success at Losail International Circuit on Sunday.

“I’m happy with the way the tests went and ready to begin a new season,” Petrucci explained. “From the very first outing with the team, I’ve been trying to further optimize my approach, both physically and mentally, to make the most of this opportunity. I’ve also made some important changes to my training and dietary regimes, and I feel as ready as ever for the upcoming battle.

“We managed to be fast in each session during the winter tests, but in the end it’s the race that matters, and that’s usually a different story. We have a lot of competitive rivals, especially on this track given the recent tests done here – it won’t be easy to put them behind us, but I’m confident we have some good cards up our sleeve.”

Petrucci was consistently quick throughout testing, remaining inside the top 10 for much of the two outings in Malaysia and Qatar.