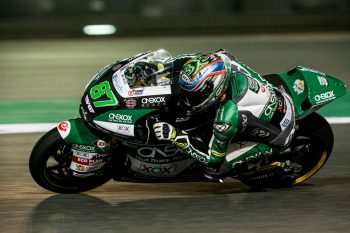 An amazing performance in Sunday’s 20-lap encounter at Qatar’s round one of the 2019 Moto2 World Championship has marked an inspiring start to Remy Gardner’s campaign.

The Australian, who’s transitioned to ONEXOX TKKR SAG Racing Team this season with the new-era Triumph-powered engine, qualified in P5 before putting on an exceptional display in the opening race of the season.

Gardner held down third position on the final lap, however he was just pipped at the line by Dynavolt Intact GP’s Marcel Schrotter – just 0.002s separating them – while still signifying the best result of his career.

“What a start to the season,” Gardner stated. “We were strong from the off and did a good job in qualifying. I made a good start and was able to find my rhythm. I honestly thought we had done it but, in the end, we come away from Qatar with thirteen points, my best ever GP finish and the confidence that we can run at the front.

“I lost some grip in the closing laps and we need to find a bit more speed, but we will get there. Massive thanks to the ONEXOX TKKR SAG Racing Team for the giving me the tools to fight at the front. See you all in Argentina!’

The Moto2 World Championship returns to action on 31 March in Argentina for round two of the series.