Third place finish a surprise to the British talent. 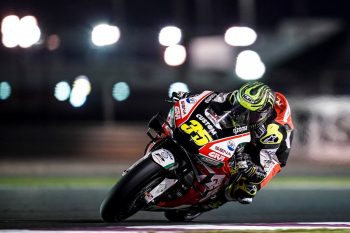 Cal Crutchlow has reaped a great sense of satisfaction from his third place finish at Qatar’s opening round of the 2019 MotoGP World Championship after labelling pre-season testing a ‘waste of time’.

The British talent, who hasn’t raced since the Japanese grand prix after fracturing his ankle in practice at the Australian grand prix last year, rode strongly in the 22-lap outing aboard his LCR Honda Castrol Team RC213V, positioning himself well in the closing stages to round out the podium.

Coming back from injury and struggling through pre-season testing has made the result somewhat of a surprise to Crutchlow, still declaring the weekend as a difficult encounter.

“It’s great to even be back racing in MotoGP, let alone come away with a podium finish, but my LCR Honda Castrol Team did a great job,” Crutchlow commented. “We worked hard this weekend because the tests were a bit of a waste of time for me. This weekend has been difficult, and if you had asked me after warm-up if I’d finish on the podium I would have laughed!”

“I played my cards in the race, I felt good and once we started the race myself and Marc Marquez had similar tactics – saving the rear tyre and managing things a little bit more. What a great start to the season for everybody, for my team, for the riders and the fans here in Qatar and for the people watching at home.

“It seems every race in MotoGP is always a battle and it was nice to be in it and race and get a podium. It’s a dream to be honest. At one point we didn’t know if I was going to be coming back at all.”