Granado tops day one of MotoE testing in Jerez

Australia's Hook sixth on the timesheets in Spain. 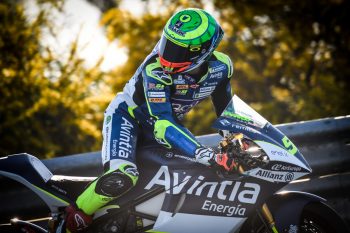 Eric Granado (Avintia Esponsorama Racing) topped the classification on day one of the official MotoE test in Jerez, Spain, with a 1m48.984s time, heading Niki Tuuli (Ajo Motorsport MotoE) by 0.433s, with Hector Garzo (Tech 3 E-racing) third at the end of action.

The FIM Enel MotoE World Cup riders got their first piece of 2019 Energica Ego Corsa action of the year underway at the Circuito de Jerez-Angel Nieto, with their most recent test having taken place at the end of November in 2018.

Tricky conditions met the riders then, but there were no such worries on Wednesday in Jerez and, as well as a solid day’s testing, there was also chance to see the teams donning their 2019 liveries for the first time out on track.

Just over half a second back from Granado in fourth place on day one was Mike Di Meglio (EG 0,0 Marc VDS), with Alex De Angelis (Alma Pramac Racing) completing a top five covered by 0.591.

Just over a second covered the fastest eight riders on Wednesday, with the top 10 completed by Jesko Raffin (Dynavolt Intact GP) fresh from scoring points as a replacement rider in Moto2 and Italian Lorenzo Savadori (Trentino Gresini MotoE). The riders will be back out for another two days of testing on Thursday and Friday.