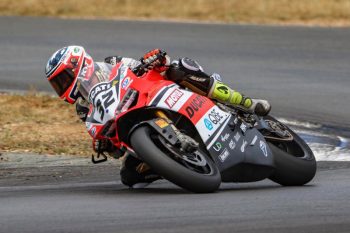 Jones has taken part in two tests with DesmoSport since Phillip Island’s opener last month and will take the place of triple world champion Bayliss, who continues to recover from hand injuries sustained at round one.

“While it’s unfortunate Troy can’t ride, I’m grateful for the opportunity to join DesmoSport Ducati,” Jones stated. “I initially tested the bike at Wakefield Park a week ago to help work on the set-up in preparation for Troy to race, and I was really happy with both the bike and the progress we made. The extra laps are certainly going to benefit for the race weekend and I’m really looking forward to racing round two on the Panigale FE.”

Jones rode for DesmoSport Ducati in 2016 before departing for Europe, spending a single season in the European Superstock 1000 series with Aruba.it Racing and then heading to ride a Kawasaki in Spain last year. With his international plans not yet concrete for 2019, he is an ideal replacement for team co-owner Bayliss.

“The surgery on my finger was successful, but after trying to ride the bike this week it just hasn’t had enough time to heal, making it impossible for me to ride at speed,” explained Bayliss. “It’s tough watching another racer on your bike, but Mike is a part of the DesmoSport family.

“He’s riding really well, looked really comfortable on the bike in testing and has given the team some great feedback to keep improving already, so although it’s not an ideal situation, I’m happy to have someone of Mike’s calibre be able to step in for me.”

Jones was a surprise fourth overall at Phillip Island, in which he piloted a borrowed Kawasaki Ninja ZX-10RR, delivering a standout performance in race three when he rode to second position and recorded a new lap record of 1m31.8s in the process.