Switch to YZF-R1 a positive one so far during Monteblanco shakedown. 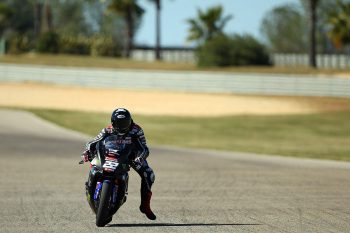 O’Halloran launched to the top of the timesheets shortly before lunch, but a high-side ended his day early as he sat out the afternoon session ready to re-join the action on Friday.

“Today was a really good day, it feels like every time we head out on the bike we find an improvement,” O’Halloran said. “This morning we worked a little more on refining the new forks we tried yesterday afternoon and then after lunch we went out with the new swing-arm and links.

“It takes a bit of time to fine tune things, but every time we went out we went quicker. I did a couple of 1m36s today, four or five of them and feel really comfortable on the bike. We’ll keep working tomorrow, when we’ve got a frame to test which is probably the biggest thing we’ll test over this period so we need to see whether that’s a step forward.”

O’Halloran upped the pace again in the closing stages to claim the top spot, despite a last lap run from Irwin who fired the Quattro Plant JG Speedfit Kawasaki into second, nudging Be Wiser Ducati’s Redding into third. His teammate, Australia’s Josh Brookes was seventh, with countryman Ben Currie in P15.