Difficulties continue for the British talent at round two. 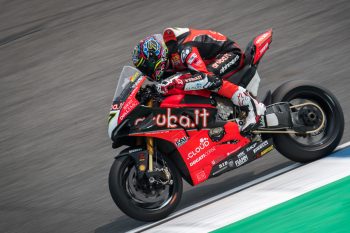 Davies has experienced a troubled season to date, struggling to take advantage of the all-new Aruba.it Racing – Ducati Panigale V4 R while his teammate and WorldSBK rookie Alvaro Bautista has dominated the first six races.

The British talent rebounded from a crash in race to finish 15th before winding up eighth in the Superpole race, which now sees him positioned 11th in the standings with 18 points to his name.

“I’m obviously disappointed not to have been able to finish the race and see the true potential that we had today especially after the progress we made this morning,” Davies commented. “Regarding the technical problem, after feeling something was a little bit amiss when I lost some speed, I decided to save the engine and think about the season ahead.

“It was disappointing not to capitalise on our improvement, because today I had a good race pace and the feeling with the bike was much better. We’ve got some clear ideas on the direction to take and there’s some light at the end of the tunnel. Now we have the test at Aragon before the race, which is a good opportunity for us to make some more gains.”

The WorldSBK now heads to Aragon in Spain for round three of the series, scheduled for 5-7 April.