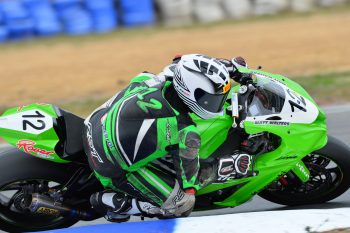 Kawasaki-mounted privateer Matt Walters discovered a new setting aboard the all-new ZX-10RR at Wakefield Park’s second round of the 2019 Motul Pirelli Australian Superbike Championship (ASBK) on the weekend, which has placed him the right direction with his overall set-up of the bike.

Walters displayed strong form all weekend, topping Q1 in the new qualifying format before winding up eighth in Q2. He went onto record a respectable 9-7 scorecard for eighth overall, positioning himself at the highest-placed privateer at the Goulburn stop in New South Wales.

“We made some more changes to the chassis after qualifying to try and get some more grip out of the bike, but it deteriorated quite badly toward the end of race one and I lost a few positions,” Walters explained. “I made some places back up before the end though, which was good and I finished strongly.

“For race two we made further adjustments and I got a much better start, well-clear of the traffic and I hung onto the lead group for as long as I could. It was nice to be there and we definitely learned a lot about the new Ninja ZX-10RR, so we’re pointed in the right direction as we head to The Bend.”

Fellow Kawasaki privateer Glenn Scott (GSR Kawasaki) also performed strongly, finishing up just three points behind Walters in the classification to round out the top 10. The ASBK now heads to The Bend Motorsport Park in South Australia for round three, scheduled on 26-28 April.