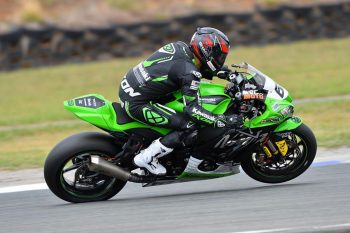 Round two of the Australian Superbike Championship (ASBK) took to the 2.2 kilometre Wakefield Park Raceway circuit, well known as a tough, tight and bumpy racetrack that requires strong acceleration and just as strong braking for a good lap time.

Although not an ideal weekend for the Dunlop-shod BC Performance Kawasaki Racing team, ZX10-R Superbike rider Bryan Staring has retained a strong position in the championship, sitting equal on points with fifth, just eight points short of third place.

Kawasaki Ninja 400 racers Callum O’Brien and Tayla Relph, both using the Dunlop Sportmax Q3+, had challenging weekends, unable to push the tyre to its limit, while the team and the ASBK continue to work together to find the right balance between the class rules and performance.

For Staring, a qualifying position of ninth wasn’t what was hoped for. However, a strong start in race one had the West Australian in the mix from the beginning in the incredibly fast-paced racing. He finished 7-8 for seventh overall in the two superbike races, with a personal race time seven seconds faster than in 2018.

Kelvin Reilly, BC Performance Kawasaki Team Owner: “The weekend wasn’t ideal for us, that’s for sure. Lachlan (Epis) had a big crash in race two, red-flagging the second superbike contest, but luckily he’s OK. Bryan, even after a great jump, had a tough time moving forward in the pack on the short track. Both our riders love the feel, grip and life of the front tyre, and we’re finding that the rear tyre options continue to give us an impressively long grip life, and in fact, for us, we’re confident, if we had longer races, Bryan would quickly move forward through the pack in the later stages. Unfortunately though, longer races are not part of the championship, and so we need to concentrate on gaining solid points at tracks that don’t suit us, and take advantage of places like Phillip Island and The Bend where tyre durability becomes more of a factor for our competitors.”

Dunlop Motorsport Manager, Robbie Bugden: “There’s no denying it was a tough weekend for our riders, and not all down to individual performances. Bryan had some impressive starts, moving forward three or four positions on the first lap, but just wasn’t able to take advantage of our strengths in the later stages of the race on such a short track. Both in testing and in competition, we continue to show that our race-spec tyres are offering incredible grip, solid lap times at the highest level, and class-leading longevity.”

The ASBK now heads to The Bend Motorsport Park in South Australia on April 26-28 for the third round of the championship, alongside the Asian Road Race Championships, where the Dunlop team will once again be on the ground supporting racers, offering technical advice and tyre fitting for both the ASBK and ARRC competitors.