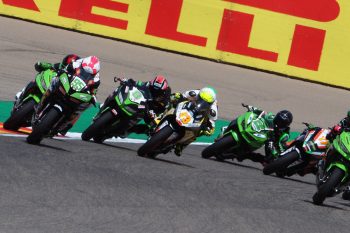 The SBK Commission has revealed regulations changes to the FIM Supersport 300 World Championship (WorldSSP300) that will come into effect for the 2019 season, which kicks off on 5-7 April at Aragon in Spain.

The goal of the balancing solution in the category was not to reduce all the machines to the level of the slowest, but to work to balance around the middle performing bikes.

The KTM RC390R was chosen as the reference machine for 2019 – Yamaha has worked tirelessly throughout the winter to produce a high-value engine kit raising the performance of their 320cc YZF-R3 to match that of the KTM.

The Kawasaki Ninja 400 will have an inlet restrictor fitted to lower the power output of the 399cc machine. The combined rider/machine weights will also differ slightly to account for the different torque levels of the very different machines.

The World Supersport 300 category is the place to discover the newest rider talent and thanks to the co-operation and understanding of the manufacturers in working together with the FIM and Dorna, it is a category where the outright performance of the machines is not the primary goal.