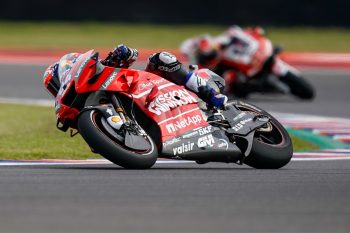 Championship leader Andrea Dovizioso (Mission Winnow Ducati) leads an incredibly tight MotoGP field at the end of play on Friday at the Argentinian grand prix, topping a manic shuffle to the timesheets at the end of FP2 as riders pushed to make it into that all-important provisional Q2 graduation zone.

And Dovizioso may have ended the day on top once the action was over, but the gap back to P2 was tiny as the Italian was just 0.009s ahead of Independent Team rider Jack Miller (Pramac Racing).

The rain mildly threatening overhead ultimately never came to fruition but the seven minute push for a lap-time on fresh rubber made for a spectacular end to the day. Third went to Maverick Vinales (Monster Energy Yamaha MotoGP) as he headed an incredibly close trio, with LCR Honda Castrol’s Cal Crutchlow just 0.001s off the Spaniard.

Just under a tenth was the next gap and that was back to veteran Valentino Rossi (Monster Energy Yamaha MotoGP), the 2015 winner at the venue, before another infinitesimal 0.010s split him from Alex Rins (Team Suzuki Ecstar).

FP1 leader Marc Marquez (Repsol Honda Team), who also set the pace throughout much of the second Free Practice session too, was deposed down to P8 by the last minute dash. Sophomores Franco Morbidelli (Petronas Yamaha SRT) and Takaaki Nakagami (LCR Honda Idemitsu) rounded out a top ten split by less than half a second.

So who’s at risk of missing out on Q2 should the rain come down on Saturday morning? Aprilia Racing Team Gresini’s Andrea Iannone and Aleix Espargaro only just missed out in P11 and P12 respectively, ahead of a somewhat out of position Danilo Petrucci (Mission Winnow Ducati), who crashed in the morning. Rookie duo Francesco Bagnaia (Pramac Racing) and Joan Mir (Team Suzuki Ecstar) lurk close by, too.

Jorge Lorenzo (Repsol Honda Team), meanwhile, had a tough first day as he comes back from injuries sustained to his ribs in Qatar and the scaphoid broken in pre-season. He was P21 on day one and the final man covered by less than a second on an extremely competitive Friday – nevertheless quite a feat in terms of pace as he fights back to fitness and adapts to his new machine.

The two veterans had some close company in the form of Remy Gardner (ONEXOX TKKR SAG Team) in third, the Australian 0.124s off the top and proving the star of the show in FP2 after a spectacular save, with Augusto Fernandez (FlexBox HP 40) taking P4 and still within two tenths. The top five was completed by an impressive performance from rookie Nicolo Bulega (Sky Racing Team VR46).

In Moto3, was a battle of two former pole position men at Termas de Rio Hondo as John McPhee (Petronas Sprinta Racing) – on pole in 2017 – beat Tony Arbolino (VNE Snipers) – the 2018 polesitter – to the top by just 0.079s after the Scot ended the day an impressive two seconds quicker than his lap from FP1. 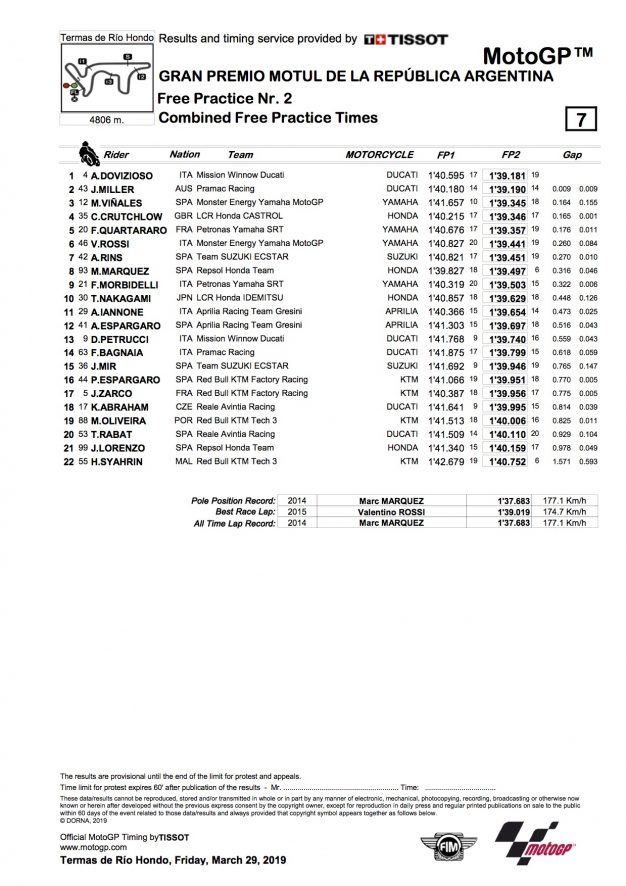 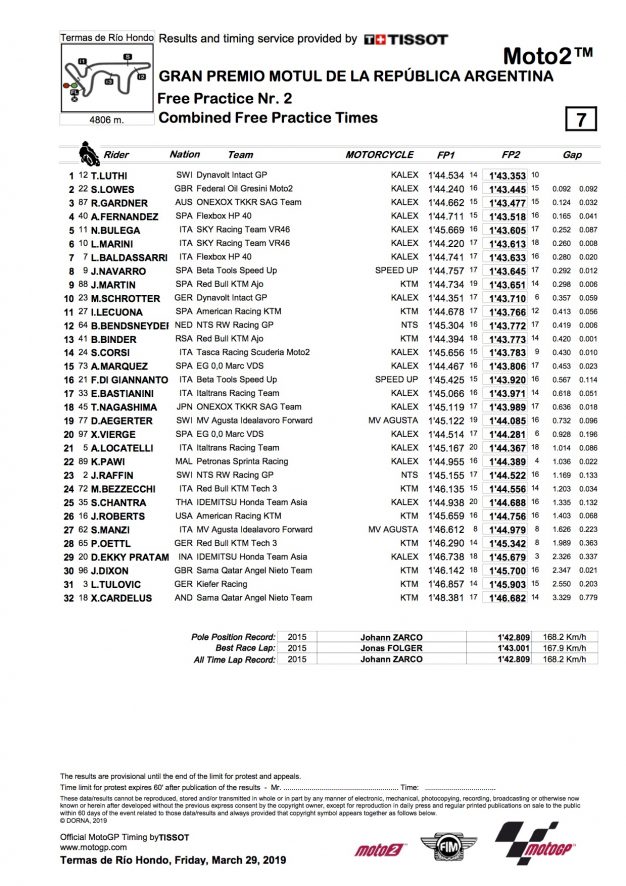 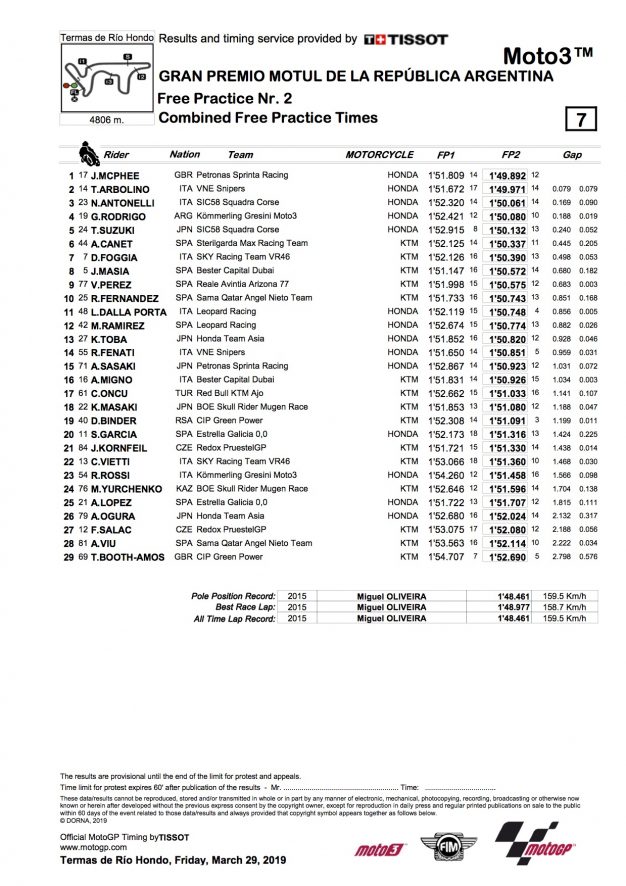