Pramac Racing's Miller shy of the podium in fourth. 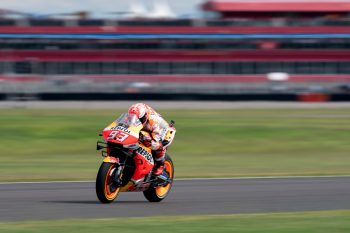 Marquez got an unthreatened hole-shot after a blinder of a start with second place Maverick Vinales (Monster Energy Yamaha MotoGP) getting bogged down, allowing Dovizioso, Rossi and Australia’s Jack Miller (Pramac Racing) to get by the Spaniard.

With Marquez holding position off the line, it was a case of head and hammer down for the number 93 as he bolted to a one second lead on lap one, with that gap increasing to 2.4s after lap two as it soon became a race for second.

That race for second was fierce though as Dovizioso, Rossi, Miller, Cal Crutchlow (LCR Honda Castrol) and Franco Morbidelli (Petronas Yamaha SRT) scrapped it out. But it was soon rostrum challenge over the Crutchlow as Race Direction gave him a ride through penalty for jumping the start – no repeat win or podium for last season’s Argentina GP victor.

Back at the front and on lap eight Marquez’ lead was stretched to five seconds as six riders all had their sights set on second, with Danilo Petrucci (Mission Winnow Ducati) and Vinales joining the fray. Rossi eventually got the better of Dovi on lap nine after running in hot at turn five on lap eight after overtaking his compatriot, but the Ducati rider locked himself onto Rossi’s M1 tailpipes as the Italians locked horns in Termas.

It was ‘The Doctor’ who held the P2 baton at the halfway point, eight seconds from Marquez, with Dovizioso, Morbidelli, Petrucci, Miller and Vinales in tandem, with Team Suzuki Ecstar’s Alex Rins creeping up to the rear of Vinales after making up ground from P16 on the grid, firmly tagging himself onto the back of the podium hunt with 10 to go.

Vinales then ran wide at turn five as he dropped behind eight place’s Takaaki Nakagami (LCR Honda Idemitsu). With nine to go, a Noah’s Ark formation appeared as second to seventh were two-by-two, roughly half a second between the pairings. Dovi and Rossi locked together, Morbidelli and Petrucci interchanging for fourth with Rins and Miller engaged in battle.

Heading into the last lap it was Dovi leading Rossi. Both were clear of fourth, but which step of the podium would they be standing on? Dovizioso was able to keep second as the Yamaha had no match for the Ducati grunt down the straight, but ‘The Doctor’ sliced his way through on his countryman at turn seven.

A long way up the road, Marquez cruised round to take his first win of the season in scintillating fashion. A Marquez masterclass in Termas, with Rossi earning his first podium since the 2018 German GP. Dovi came home third, achieving his pre-race aims of a podium finish to head to Austin four points behind Marquez in the Championship.

Just behind, there was drama for two Yamahas on the last lap. Morbidelli tagging the back of Vinales at turn seven, the duo going down and out of contention. This left Miller holding fourth to repeat his 2018 Argentina GP result, with Rins climbing 11 positions from his P16 starting slot to earn fifth place. Petrucci takes away a second consecutive sixth of the season.

In Moto2, Flexbox HP 40’s Lorenzo Baldassarri continued his perfect start to year a calculated ride to claim victory. The Italian eventually took the chequered flag over a second clear of Australian Remy Gardner (ONEXOX TKKR SAG Team), who stood on the podium for the first time in his career.

The MotoGP World Championship now heads to Circuit of the Americas on 14 April for round three of the series. 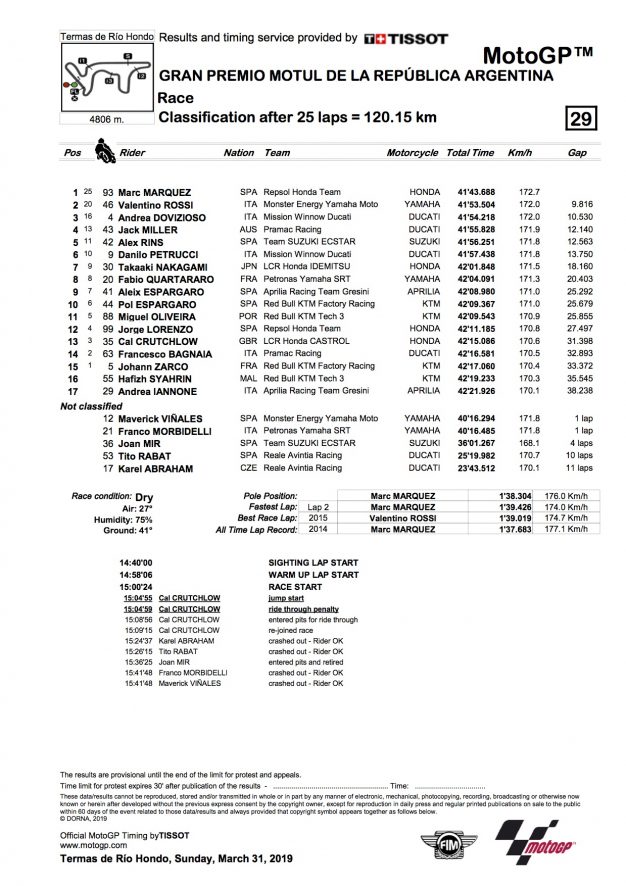 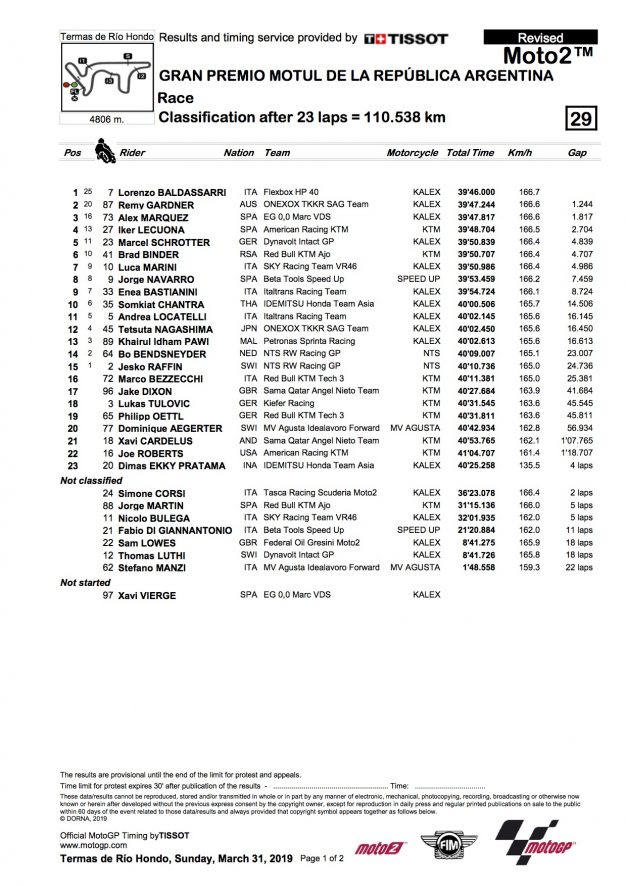 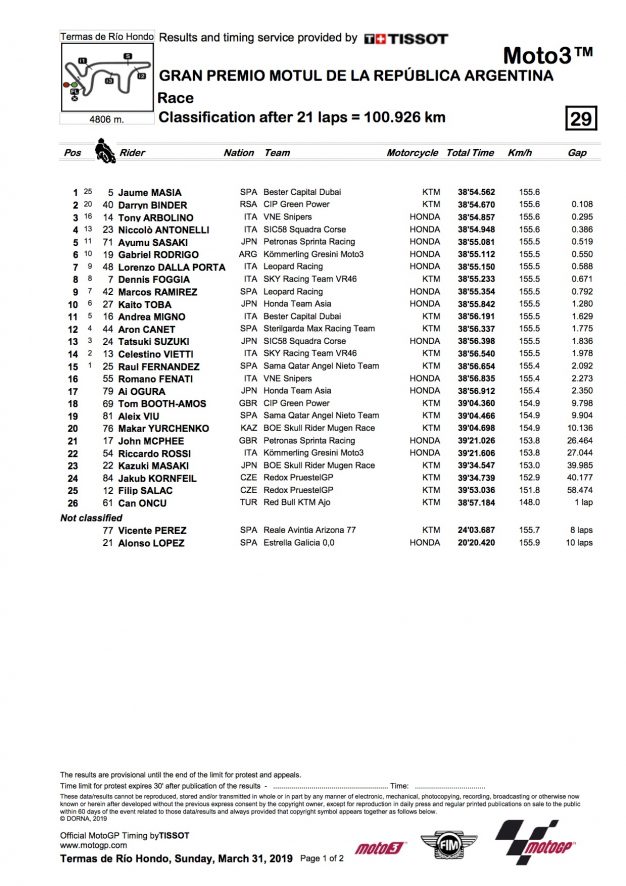