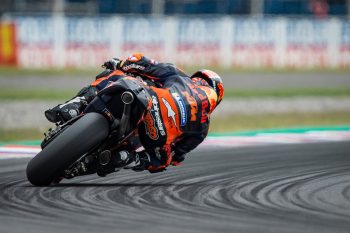 Admitting he struggled throughout the entirety of the 25-lap affair, Zarco battled his way well into the points, however a lack of energy in the closing stages saw him relinquish positions, crossing the line in P15.

“I struggled all the race and nearly hit Lorenzo at the beginning which almost put me in last place,” Zarco explained. “I had a good feeling in the first eight laps but could not pass my opponents and then it began to be harder and harder to ride the bike. I used a lot of energy to get in the points and was passed by two riders and in the end was lucky to get 15th position.

“It is difficult to have these kinds of races. At the moment I cannot ride how I want but will work to the maximum with the team to adapt to this condition. Later we will have more things to work on.

“Pol and Miguel had a nice race so if I can at least get close to them or be the first KTM will be some satisfaction but to get near the top we’ll need to do some other things. I want to keep as positive as possible and I know that all what we are going through now will make me stronger in the future.”