Vinales dismisses Morbidelli clash as ‘nothing’

Yamaha duo crash out of Argentina grand prix on the final lap. 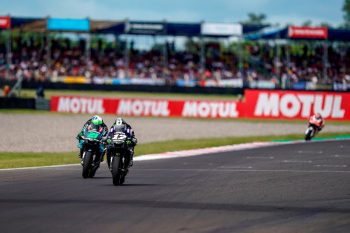 Maverick Vinales has dismissed his last-lap clash with Franco Morbidelli at Argentina’s second round as ‘nothing’ after reviewing the race footage, which saw both riders record DNF results.

Monster Energy Yamaha MotoGP’s Vinales and Petronas Yamaha SRT’s Morbidelli were locked in a three-rider battle with Danilo Petrucci (Mission Winnow Ducati) on lap 25 when Morbidelli tagged the rear wheel of Vinales, resulting in the duo crashing out of the encounter with just a number of corners to spare.

“I saw the replay of the incident with Franco and it was nothing,” Vinales commented. “It was the last lap and we all tried to be at our best, so it’s just one mistake, and it is what it is. Maybe at the next race I will make the same mistake, it’s something you can explain, it’s not a problem.

“The soft tyres were for sure the right decision, because in the first lap, though I didn’t start well, I was overtaking many riders, so finally at the end of lap 1 I think I was third or fourth. So that was not bad. But the bike wasn’t working perfectly, so we need to keep working and see if we can solve it for the next race.”

Morbidelli also spoke of the incident, explaining he couldn’t brake properly into turn seven because of the double slipstream, ultimately making contact with Vinales.

“The race had been going very well for us and we were fighting for the top positions – just like we wanted to do,” said Morbidelli. “I felt very strong in parts of the circuit. I had a great time dicing with Rossi, Miller and Crutchlow, and it was a really good race until the final lap. I was fighting for sixth position when I reached Viñales.

“I didn’t want to try a pass, but I couldn’t brake properly due to the double slipstream. Maybe it was this – combined with his attempt to cut in to pass Petrucci – that led us both to go down. It was a shame for both of us, but fortunately we are both okay. It’s important to take away the positives from this race, so that we can keep at the same level and continue improving at the next round.”