Capitalising on Aragon strengths the focus for Melandri 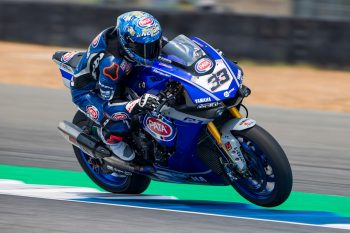 Acknowledging the long straights of Aragon won’t play into his favour, Marco Melandri’s focus is to capitalise on the Yamaha YZF-R1’s strengths in the more technical points of the Spanish circuit as the 2019 FIM Motul Superbike World Championship (WorldSBK) heads there this weekend.

The GRT Yamaha contender, who wound up on the podium last year at Aragon on Ducati machinery, believes a repeat performance is a realistic target this Saturday and Sunday, however he’ll have to establish a set-up that benefits him in the closing stages of races – an issue he’s been facing so far season.

“I’m happy to be back in Europe and Aragon is one of the most beautiful tracks we race at during the season,” said Melandri. “The long straight doesn’t play to our strengths, but there are a lot of technical sections, with nice corners, where I think we can be very competitive.

“The late race was quite a difficult one for us, but I’m excited for the weekend ahead and I’m confident that we can find a solution to the issues we experienced in Thailand. The podium is our target this weekend; it won’t be easy, but it’s a realistic target.”