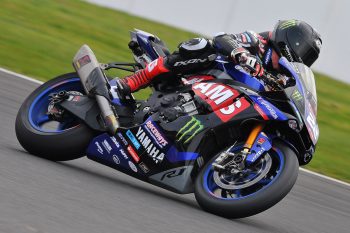 Jason O’Halloran’s first hit out on a UK circuit aboard the McAms Yamaha YZF-R1 at Silverstone’s official Bennetts British Superbike Championship (BSB) test has strengthened his form ahead of the season-opener, scheduled for 19-21 April.

The Australian has discovered commanding pace in pre-season testing across Europe since transferring to the Yamaha squad, confirming his speed in the final official test where topped the timesheets.

“We’ve had a really good pre-season,” said O’Halloran. “All the guys in the McAMS Yamaha team have done a great job. From Monteblanco to Portimao and now today, the first time I’ve ridden the bike in the UK, everything has gone really well.

“It was nice to get back on to a UK circuit and confirm our pace as sometimes European tracks in high temperatures can be a little misleading when you come back to the cold British tracks. It’s nice to leave here on top heading into next weekend, now it gets serious.”