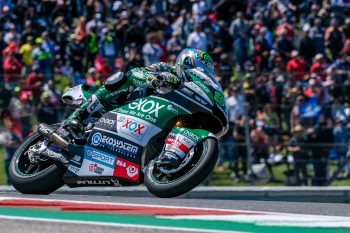 Remy Gardner admits he destroyed his tyres at Circuit of the Americas last weekend by ‘pushing like a maniac’ to recover from lost time at the beginning of the Moto2 World Championship encounter.

The SAG Racing Team contender, who scored a career-first grand prix podium at the previous round, started from 18th on the grid, however an early incident pushed the Australian wide, forcing him to relinquish a number of positions while making for an increasingly difficult outing in Texas.

The youthful talent put in a spirited ride to cross the line in P11, allowing him to retain a top five placing in the championship standings following the first three rounds.

“It was a tough weekend,” Gardner declared. “A crash in qualifying didn’t help us out and unfortunately I made a good start but Balda’s crash sent me really wide and I almost went down. I lost a lot of time and then destroyed my tyres, pushing like a maniac to recover.

“After that it was a case of bringing the bike home and in the end we got some valuable points and kept a top five position overall in the championship. I’m looking forward to the European races and am heading to Jerez with a clear mind.”

The Moto2 World Championship now heads to Jerez in Spain on 5 May for round four of the 19-stop tour.